The Mongol Scout is a cavalry unit featured in Age of Empires III: The Asian Dynasties.

Two Mongol Scouts can be sent to each civilization in the Discovery Age if they are allied to China by way of the TEAM 2 Mongol Scouts Home City Card. While not very powerful in terms of damage output, they do have good ranged resistance and hit points, combined with other civilizations LOS boosting cards they can become a potent scouting and harassment tool.

The Mongol Scout is the fastest scout unit in the game and has a higher LOS than other scout units, on top of these advantages it can also see stealthed units. Against skilled flesh and blood opponents the use of the scouts is questionable, as food or Settler shipments allow for a stronger economy and quicker age up to the Colonial Age. Against more casual players or AI opponents however it can be quite useful for early harassment. The latter is very effective if the Japanese are able to double the treasure value due to Mountain Warrior. 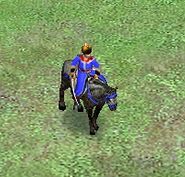 A closeup view
Add a photo to this gallery
Retrieved from "https://ageofempires.fandom.com/wiki/Mongol_Scout?oldid=239572"
Community content is available under CC-BY-SA unless otherwise noted.