Modding is the practice of modifying an Age of Empires game using third-party tools to add or change content such as attributes, buildings, or units.

These are some prominent Age of Empires mods. Note that some require the Rise of Rome expansion:

The lists below divide mods between partial conversions (add-ons) and total conversions; the first category includes mods that add to the original content of the game, as well as unofficial patches, but without dramatically altering the core aspects of gameplay. Some partial conversions can be considered overhauls; these significantly change an entire game's graphics and gameplay but not to the extend of a total conversion.

As for the second category, it includes mods of the Age of Empires games that replace most or all of the artistic assets in the original game and occasionally, aspects of gameplay.

Here are some examples from the second game: 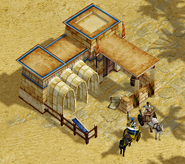 Another example, a recreation of the Charioteria, and Chariot from pre-release versions of Age of Mythology in Expanded Mod made by Morayus1 (XLightningStormL).
Español
Community content is available under CC-BY-SA unless otherwise noted.
Advertisement