Age of Empires Series Wiki
Register
Don't have an account?
Sign In
Advertisement
in: Unique units, Age of Empires III, Spanish,
and 2 more

Heals injured units (10 hit points per second, range 12)
Increases the attack of the player's units (34 AOE, stacks with other Missionaries) (with the "Unction" Home City Card)

The Missionary is special unit in Age of Empires III replacing the Priest for the Spanish. It is the fastest healer and one of the fastest land units once Mission Fervor is researched.

Unlike the Priest, it has a train limit of 10.

Missionaries can be garrisoned in the same buildings as settlers, and count as a settler when adding to a Town Center's attack.

The "Unction" Home City Card (added with The WarChiefs), gives Missionaries an aura that increases the attack of Spanish infantry and cavalry in a radius of 34 around them by 2.5%, and stacks with each other. Note that the extra attack is added to the unit's current attack, not its base attack, making it exceptionally powerful. The aura only affects units directly under the Spanish player's control; allied units (whether human or AI) and the Missionaries themselves are not affected.

Since the Unction aura does not increase hit points, the enemy may sometimes use hit-and-run tactics or units with large splash damage. Therefore, Missionaries' greatest defense are their Unction aura, their speed with Mission Fervor, and their armies' line of sight using the "TEAM Inquisition" card and the Town Watch improvement.

As Missionaries are unique to the Spanish, only technologies that they have access to are shown in the following table:

As Missionaries are unique to the Spanish, only their cards and other civilizations' TEAM cards are shown on the following tables:

The range of the Unction aura.

The stats for a fully upgraded Monitor with Unction

The stats for a fully upgraded Spanish Explorer with Unction

The stats for a fully upgraded Spanish War Dog with Unction

The stats for a fully upgraded Scottish Highlander while boosted by Unction.

The stats for a fully upgraded Musketeer while boosted by Unction 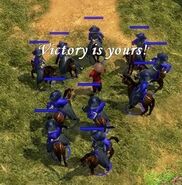 Missionaries killing the last Villager available to the Japanese

Missionary portrait in the Age of Empires III beta
Community content is available under CC-BY-SA unless otherwise noted.
Advertisement