The Missionary is the second unique unit of the Spanish in Age of Empires II: The Conquerors. It is a mounted Monk that can be trained at the Monastery.

Unlike most unique units, Missionaries do not have an Elite version.

Like its cousin, the Monk, the Missionary is capable of healing units as well as converting enemy units, but (unlike the Monk) the Missionary cannot pick up Relics. Before the Definitive Edition, it only healed at half the speed of a Monk (1 HP per 0.8s instead of 0.4s) and was unaffected by Husbandry.

It can move quite fast, making it capable of fleeing from almost all enemy units but cavalry. Including several of these in a force of Knights can considerably improve chances of winning a drawn-out battle. Missionaries also work well for converting the surviving Villagers, buildings, and units of a defeated enemy. They are affected by all Monk technologies. However, despite their advantages in movement speed, which is one of the major Monk disadvantages, the Missionary only has 7 range compared to the 9 of a Monk.

Both the Monk and the Missionary have the same cost, making the choice between them mostly a matter of tactical utility. The Missionary generally outperforms the Monk in most ways greatly improving the Monk's offensive abilities both for army support with healing friendly forces to actively converting enemies and fleeing from counterattacks. The Missionary fares much more poorly on the defensive lacking range (although with Bloodlines, they can have more hit points to compensate for this somewhat), so for situations where they must hold out in a siege behind walls, the regular Monk performs better.

For the Spanish, the Missionary gives the Spanish far more tactical flexibility for their Monks, especially while on the offense and during the late game when the Relics have already been collected.

As Missionaries are unique to the Spanish, only technologies that are available to them are shown in the following table: 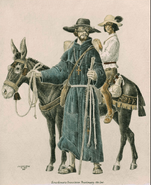 Painting of a Missionary 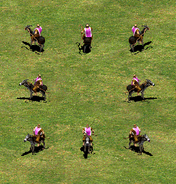 A group of Missionaries

A render of the Missionary model

Missionary in the HD Edition and Definitive Edition