"Follow me, and we will defend our homes!"
—Misenus, in the E3 story showcase scenario

Misenus[1] (more commonly known by the scenario's player name, Mineus) was a Greek hero in the original Age of Mythology campaign. He was its original main character before Arkantos.

Misenus' background is unknown, although he is a follower (and "Chosen One") of Zeus. Due to his armor, he is likely to have been a general or a higher commanding officer (IGN stated[2] that Misenus was a Greek leader). Misenus also had the ability to cast down god powers, such as Meteor, Lightningstorm, and Earthquake.

Misenus wears either a bronze or old adorned armor, and golden Attic helmet, a distinctive white, player color edged cape, and originally used a long-sword (called Bastard Sword in the files). His design suggests that he was a Greek general (or Strategos), of an unknown city-state. Misenus was different from the Greek hero due to not wielding a banner.

Based on the cinematic texture (from the game's files) and concept art, Misenus face was olive-skinned, similar to the skin color of real world Greeks, and he appeared to be in his 30s to 40s. Sharing a similar appearance to Arkantos, with a larger head, and stronger facial features.

Misenus is the name of the hero, in the original campaign, shown in an E3 2001 story showcase scenario, he was possibly the "mayor" or ruler of a small town somewhere in Greece, and had to defend his town from an invading Cyclops and his army.

The campaign is not known about, but was mostly likely an older version of the final Fall of the Trident.

Misenus as he appeared in released Concept Art 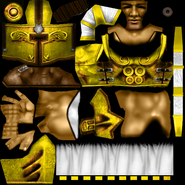 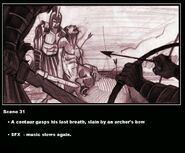 Retrieved from "https://ageofempires.fandom.com/wiki/Misenus?oldid=277595"
Community content is available under CC-BY-SA unless otherwise noted.