The Minuteman is a ranged infantry unit in Age of Empires III that can be spawned through Levy at Town Centers. It is a quick-trained Musketeer that loses hit points over time, meant to be used as an emergency defensive unit.

Native American and Asian civilizations have Warriors, Sentries, and Irregulars instead of Minutemen, respectively.

Minutemen quickly loses hit points over time, which only stops when they have only one hit point remaining. Any damage taken after that will kill them, making them almost useless once this occurs; however, Minutemen are quite strong against villagers. Minutemen are also useful in temporary battles or to react quickly to an immediate crisis.

Minutemen are a good tool for quickly defending Town Center. They are also effective in large infantry armies due to their good attack and being protected by the numbers around them. This is especially true of the Portuguese because of their free multiple Town Centers.

Players can essentially create endless armies of Minutemen by having their Explorer continually build Town Centers and deploying Minutemen from them. However, given their health degeneration and the time it takes to build a Town Center (unless a Covered Wagon is assisting), it is not recommended to do so.

By the Industrial Age, it is possible to have up to twenty Minutemen included in an army for low cost. But the fact that Minutemen automatically lose hit points should be kept in mind: they should not attack distant areas, as they arrive at such locations drained of hit points.

"Minutemen were groups of irregular soldiers who vowed to be ready in a minute's notice to fight against British soldiers leading up to and during the American Revolutionary War. They had no formal training and used their own weapons as arms, relying on hunting skills for marksmanship and guerilla tactics learned from the Native Americans in the recent French and Indian War. These tactics made the farmers and tradesmen who took up arms against the British unpredictable and effective. Monuments stand at the North Bridge in Concord and Battle Green Square in Lexington to commemorate the first fighting of the American Revolution, fighting done by militia and Minutemen." 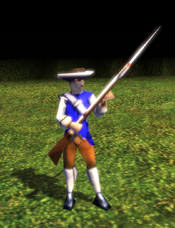 Minuteman model
Add a photo to this gallery
Retrieved from "https://ageofempires.fandom.com/wiki/Minuteman?oldid=261368"
Community content is available under CC-BY-SA unless otherwise noted.