16 feet
A Minion is an Egyptian myth unit in Age of Mythology. Minions cannot be trained at the Temple like regular land myth units; instead, they are created in one of two ways. First, Nephthys' Heroic Age god power, Ancestors, causes up to 13 Minions to rise from the ground when it is invoked on land. Their naval counterpart is the Lost Ship. Second, the Mythic Age Mummy's special attack kills a unit instantly - it then returns from the dead as a Minion.

In both cases, Minions normally have a lifespan of 1 minute. The Atef Crown technology doubles this to 2 minutes, but only for Minions created by Mummies.

Ancient Egyptians believed that, upon death, the body seperated into different parts, such as the ba, the animating spirit, and the ka, a replica of the body. Funeral customs were intended to provide the ka with all the resources it would need after the physical body's death. If not, it could become a vengeful spirit that sought retribution.

Minions coming out of the sand. 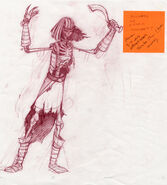