The Mining Camp is an economic building in Age of Empires II. It is a drop-off point for gold and stone. Also, mining technologies are researched here.

It is advantageous always to build Mining Camps near Stone Mines or Gold Mines so that the player's Villagers will be able to transport the resources to the Mining Camp quickly. Leaving one tile of space between the Mine and the Mining Camp will optimize the gathering speed if there are at least three Villagers working on that Mining Camp.

The Age of Kings[edit | edit source] 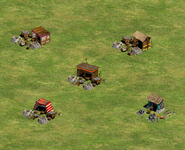 All Mining Camps in The Age of Kings and The Conquerors

All Mining Camps introduced in the HD expansions

All expansion Mining Camps in the Definitive Edition

Spritesheet for the Mining Camp
Add a photo to this gallery
Retrieved from "https://ageofempires.fandom.com/wiki/Mining_Camp_(Age_of_Empires_II)?oldid=313326"
Community content is available under CC-BY-SA unless otherwise noted.