The Miner is a unique unit available in the Age of Empires III campaign. Miners are capable of throwing dynamite and hacking with their pick axes, and have a great siege attack. Their dynamite is extremely good against groups of infantry and buildings.

They can only collect coin (Mines, Estates) or gather resources from crates of food, chests of coin, and cords of wood. Miners cannot be trained from buildings, but are available in the Scenario Editor.

Although they are just normal civilians, they possess unusually high attack. They can be powerful in numbers when taking down a building and other units and their above-average hit points can be compared with other infantry units.

In their appearance in Ice, they excel against Russian Strelets, and can also fell groups of Cossacks, but they must be on the lookout for Oprichniks and Great Cannons, as the former have great bonuses against civilian units, whereas a single Great Cannon can easily fell them, thanks to its very high attack.

Their first appearance is in Act II: Ice, in the Bring Down the Mountain scenario, given by John Black to Kanyenke, who has to collapse some ice columns in the Rockies in order to block passageways to the eastern colonies and stall the advancing Russian Circle of Ossus army.

The Miners also feature in the Urgent News scenario of Act II: Shadow of The WarChiefs, they appear at the beginning of the scenario, collecting coins from a Silver Mine and at the end of the scenario, when Sheriff Billy Holme and some Miners raid a Lakota village without provocation. 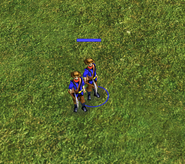 A Railroad Worker (left) and a Miner