Age of Empires Series Wiki
Register
Don't have an account?
Sign In
Advertisement
in: Atlantean buildings, Classical Age, Age of Mythology,
and 2 more

1,200
The Military Barracks is a Classical Age building in Age of Mythology: The Titans that is only available to the Atlanteans. It is where the standard Atlantean military units are trained and where technologies that improve them are researched.

Military Barracks units are soft counters, that is, they are better all-rounders than Counter-Barracks troops, but do less damage against their specific targets. For example, the Murmillo does less damage against cavalry than the Katapeltes. They are also more cost-effective, assuming the enemy uses more than one type of unit. 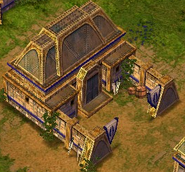 Two Military Barracks. Notice that the one on the left is rotated.
Community content is available under CC-BY-SA unless otherwise noted.
Advertisement