Grito de Dolores
Miguel Hidalgo y Costilla (1753 – 1811) is a Mexican priest who is regarded as the Father of the Nation by the Mexicans for his role in kickstarting the Mexican War of Independence by leading the people to revolt against the Spanish on the Grito de Dolores, which was featured as a Historical Battle in Age of Empires III: Definitive Edition. He is also a revolutionary leader in The WarChiefs and The Asian Dynasties, and the AI personality of the Mexicans in the Definitive Edition. He also appears in the Grito de Dolores Historical Battle as a hero called "El Padre".

In The WarChiefs, Hidalgo also appears as the revolutionary leader of Mexico, which is available to Portuguese and Spanish. As soon as the player revolts by choosing him, 10 Bandit Gunslingers and Bandit Riders will appear in the Home City shipment point. 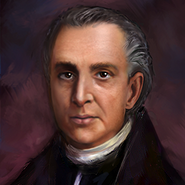 Wikipedia has an article about:
Miguel Hidalgo y Costilla
Community content is available under CC-BY-SA unless otherwise noted.
Advertisement