The Meteor Hammer is a melee heavy cavalry in Age of Empires III: The Asian Dynasties that is unique to the Chinese and are trained as part of the Forbidden Army or (since the Definitive Edition) as part of the Black Flag Army.

Meteor Hammers are a very unique heavy cavalry available to the Chinese. They are characterized by their ranged melee attack, an attribute not shared with any other unit. Their attack is a melee attack, like any other heavy cavalry, but are able to attack a unit up to 5 range away. Thus, in crowded battles, they are able to fight much more effectively than other melee units. They are quite fragile, however, so should be properly guarded with other units.

Meteor Hammers are specialists at countering artillery, with a powerful multiplier and high melee damage. Coupled with the range on their attack, they are nearly impossible to block from reaching their target without a very large number of units, and can take out artillery in mere seconds.

This does not stop them from being effective in other situations. Meteor Hammers make very strong raiders. With the range on their attack, they are able to simultaneously attack the same Villager without bunching up or blocking each other, and can even attack through walls, Houses, or around huntables, berry bushes or trees that would obstruct any other cavalry.

The range on their attack also gives them the ability to fight behind Changdao Swordsmen, forming a powerful combination able to effectively fight almost anything that comes near.

Meteor Hammers are able to be upgraded quite substantially by stacking Double Faced Armor, Manchu Combat, and Western Reforms, and additionally, 10% hit points by allying with British at the consulate. These all combined can drastically reduce their fragility, allowing them to function as standard heavy cavalry, but with their unique ranged attack and strong attack.

The Meteor Hammer is automatically upgraded to Disciplined (+20% hit points and attack) in the Fortress Age.

As Meteor Hammers are unique to the Chinese, only technologies that they have access to are shown in the following table:

As Meteor Hammers are unique to the Chinese, only their cards and other civilizations' TEAM cards are shown in the following tables: 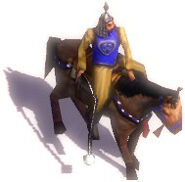