7
The Merchant is an untrainable unit in Age of Empires II: Definitive Edition. It is only available in a few campaigns and the Scenario Editor.

Merchants seem to be a "decoration" unit, as they only serve the purpose of briefly-appearing characters in campaigns. Much like Kings, they have no attack or function whatsoever, being only limited to walking around, and their appearance and icon changes depending of the civilization they are part of. Merchants also run somewhat faster than most standard infantry units, and have above-average Line of Sight. 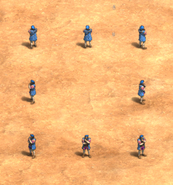 A group of European Merchants.

From left to right: European, Middle Eastern, East Asian, American, and African versions of the Merchant.
Add a photo to this gallery
Retrieved from "https://ageofempires.fandom.com/wiki/Merchant?oldid=304323"
Community content is available under CC-BY-SA unless otherwise noted.