The Maya Holcan Spearman is a heavy infantry native warrior in Age of Empires III that could be trained at a Trading Post built on a Maya settlement. It was replaced with update 54545 by the Maya Holcan Javelineer, a Musketeer-type unit.

The Maya Holcan Spearman is similar to a Pikeman, but has more hit points and a greater siege attack; However, it is one of the slowest anti-building attacks of any infantry unit. Under some conditions, units with lower siege damage but the normal 3.0 attack speed will inflict more damage over time than the Holcan Spearman; Their siege rate of fire is standardized to 3 in the Definitive Edition. 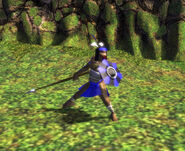