The Maya Holcan Javelineer is a ranged infantry native warrior in Age of Empires III: Definitive Edition that can be trained at a Trading Post built on a Maya settlement. It replaces the Maya Holcan Spearman since update 54545.

The Maya Holcan Javelineer is a heavy ranged infantry, similar to the Musketeer. It is effective against cavalry in melee due to a multiplier, but is vulnerable against artillery and Skirmishers.

They can also be trained by the Mexicans after revolting to the Maya with a starting build limit of 10, which can be increased by 1 for every shipment.

The "17 Maya Holcan Javelineers" card is also available to Incas

Maya revolution allows to train Maya Holcan Javelineers at the Barracks, War Hut, and Fort, with a starting build limit of 1. Every Home City shipment increases their train limit by 1.
The "Jungle Warfare" card is also available to Yucatán 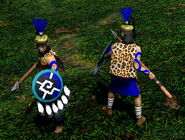