"Provides early economic improvements and exchanges one resource for another."
—In-game description

The Market is an economic building in Age of Empires III. It provides early economic technologies and allows the player to trade coin for food or wood, or vice-versa.

It functions most like its Age of Empires counterpart, which also provided upgrades. Unlike in Age of Empires II or Age of Mythology, the Market can no longer be used to facilitate trading to gain gold with other players. However, unlike all previous games, the Market is no longer required to give tribute.

European civilizations serve as the baseline setup for technology researched at this building, with one technology per resource for each age, as well as two Villager combat upgrades. Major Native civilizations do not research that many technologies here, but their technologies at the Farm and Plantation apply to all sources of that resource instead of just gathering from the respective building. Asian civilizations split the effect of the resource technologies in half, between a resource-specific technology and an all-resources technology, but additively the result is the same increase in resource collection per age.

"A market provides a location to bring together buyers and sellers to trade. Ideally, prices are set by supply and demand. Markets were composed of stalls where vendors would sell their wares. Often people wouldn't pay with money, but would barter by offering a service in return for whatever they needed. As cities grew larger, stores replaced the open marketplaces, and money became a more common form of currency."

Icon of the Market in Age of Empires III 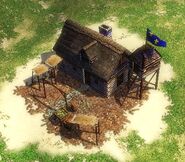 The Market in the Discovery Age 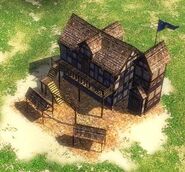 The Market in the Colonial Age
Add a photo to this gallery
Retrieved from "https://ageofempires.fandom.com/wiki/Market_(Age_of_Empires_III)?oldid=279916"
Community content is available under CC-BY-SA unless otherwise noted.