The Market is an economic building in Age of Empires II that becomes available once the Feudal Age is reached and a Mill is built.

Markets act in a number of roles, particularly in team games. As soon as the first Market is built, the player automatically sees all allied players' Line of Sight. Secondly, they enable the tribute of resources. Thirdly, gold can be used as a currency traded for other resources. Fourth, they can collect gold via trade with Trade Carts, especially important in later stages of team games. Finally, the Market is the place where trade-related technologies are researched to enhance these abilities, as well as potentially fulfilling the criteria to unlock the Castle Age. In summary, the Market is a rather important building overall, even though its importance may vary depending on the match.

Markets make an essential part on economy especially in team games as they provide an unlimited source of gold, accumulated through trading.

The equation for gold received while trading at other Markets is quadratic depending on distance. The farther away the Market is, the more gold the Trade Carts return. The productivity increases with the distance, so it is always worth it to build Markets far away from other Markets even though the Trade Carts take longer to reach their destination.

When trading with allies, is important to know which Markets are better defended to prevent losing trade units. It is also recommended to protect trade routes with military units or defensive structures. If Trade Carts must travel through a wall, it is important to remember to keep the Gate open at all times to avoid losing Trade Carts, because when they reach a closed Gate, they will take another way to reach their destination even if the Gate is opened a short time after they reached it. Often, Trade Carts are lost because of that since the route they then choose is likely to be dangerous.

Trading can also be established with neutral and hostile players' Markets too, emulating thus the real life practice of smuggling. While this can be surprisingly efficient when trading with defeated players (especially in campaign scenarios), it is ill-advised when the player in question is still active, as they might kill the Trade Carts.

Markets are also important because a player can exchange its resources to balance its economy. This can greatly help to jump through Ages or to overcome a temporary shortage of a particular resource.

The Market prices for each commodity are universal for all players. Commodities are sold or bought 100 at a time. Each commodity (food, wood, stone) has a "fair" (and invisible) exchange price, but the players cannot exchange their resources at the "fair" price because there is a 30% commodity trading fee. At the beginning of each game, the "fair" price for food and wood is 100, but because of the fee, the actual prices the players see are 70 and 130. Stone, however, begins at a "fair" price of 130, which leads to a starting rate of 91/169. The game simulates supply and demand by adding or subtracting 3 to the "fair" price each time 100 commodity resources are traded. The minimum and maximum "fair" prices for any commodity are 20 and 9,999, respectively. This means that to "bottom out" the price of a commodity beginning at the starting price, the player needs to sell 4,000 of food/wood or 5,500 stone (obtaining 1,708 or 2,926 gold). Researching Guilds cuts the commodity trading fee in half (15%), but can only be done in the Imperial Age and is not available to all civilizations. If buying a resource would cost less than 25 gold, the game will set the buy price to 25 gold.

The Saracens have the best Market in the game at only 75 wood, and a commodity trading fee of only 5%. This also can allow them to reach the Castle Age sooner than other civilizations and perform a Monk rush.

Trade routes should always be made as long as possible, as the increase in gold for Markets placed further apart is greater than the increase in time taken for a Trade Cart to complete the journey. However, players must take into consideration the population limit and the cost of the unit that they want to make. The exact equation for gold received from trading is: 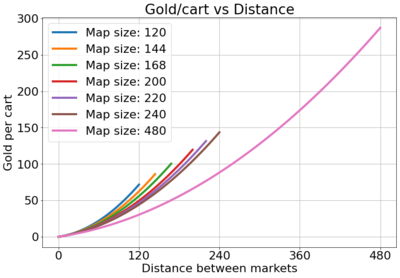 is the number of tiles along any edge of the map, and

is roughly the Euclidean distance between the Markets and can be calculated exactly as:

are the distances between the Markets in either axis-aligned direction, measured from the center of each Market. Note that the 0.46 in front of the first expression for Trade Cart gold is actually calculated as

by the game, where 2 is a constant, and the other two terms depend on the Trade Cart speed and whether the player has a Spanish ally - but can in general also be treated as constants.

All Feudal Age Markets introduced in the HD expansions

All Castle Age Markets introduced in the HD expansions

All Imperial Age Markets introduced in the HD expansions

All original game Feudal Age Markets in the Definitive Edition

All expansion Feudal Age Markets in the Definitive Edition

All original game Castle Age Markets in the Definitive Edition

All expansion Castle Age Markets in the Definitive Edition

All original game Imperial Age Markets in the Definitive Edition

All expansion Imperial Age Markets in the Definitive Edition

Spritesheet for the Market; the Feitoria is also included 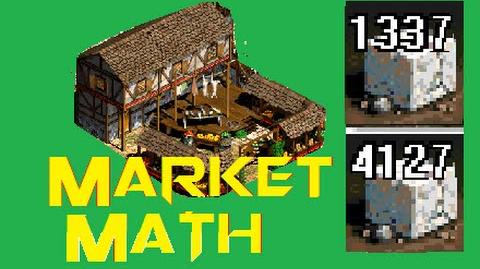