The Burning of USS Philadelphia
Commodore Stephen Decatur (1779 – 1820) is an American naval officer in a Historical Battle in Age of Empires III: Definitive Edition.

He is regarded as his nation's first post-Revolutionary War hero, and served in the U.S. Navy in wars against the Barbary States, France, and the War of 1812 against Britain.

The Marine Officer uses the same dialogue as the American General. 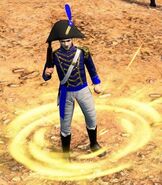