The Mantlet is a ranged infantry siege unit in Age of Empires III: The WarChiefs that is unique to the Haudenosaunee and can be trained at the Siege Workshop.

The Mantlet has high hit points, very high damage resistance, moderate attack, and powerful siege. However it is slow and short ranged, and also fairly expensive.

Mantlets can help compensate for the relatively low siege that most of the Haudenosaunee units have, taking down walls and fortifications, and allowing other units to continue to fight against enemy units. Mantlets are classified the same as a skirmisher, making them only especially vulnerable to artillery (which their high hit points somewhat compensate for), cavalry (especially lancer-type), and Abus Guns. Grenadiers and Flamethrowers also can pose a threat, though to a lesser extent.

A general use for Mantlets is as a screen for long ranged units. Their incredible hit points and armour lets them tank an immense amount of enemy ranged fire, protecting Forest Prowlers and even Musket Riders, which allows them to do much more damage without taking fire. The disadvantage of this is it drastically reduces the speed and mobility of the army, so it should be used situationally, such as in chokepoints, where mobility is largely irrelevant.

With some boost from the War Chief, the Mantlet can have over 1,000 hit points with all upgrades. This allows them to be very effective when deployed in numbers as cannon fodder for protecting units that are weak against ranged damage. With the "Siege Discipline" shipment their population cost is dropped to only 1 which makes mass production of this unit very easy.

As Mantlets are unique to the Haudenosaunee, only technologies that they have access to are shown in the following table:

As Mantlets are unique to the Haudenosaunee, only their cards and other civilizations' TEAM cards are shown in the following tables: 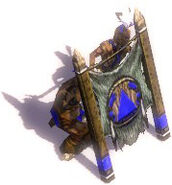 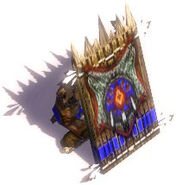