Age of Empires Series Wiki
Register
Don't have an account?
Sign In
Advertisement
in: Atlantean buildings, Archaic Age, Age of Mythology,
and 2 more

This has both pros and cons. Fewer Manors have to be built in order to maximize population space, but when one is destroyed, 20 population slots are lost rather than just ten. Like for like, Manors cost a little more than Houses but have more hit points. A Manor would occupy a lager portion of the player's base, but since they only have a build limit of five, they technically occupy the same space as large as 10 Houses. Unlike Houses, Manors can garrison units – up to five human units or Citizens.

When agriculture made possible a less nomadic lifestyle, humans began creating more permanent living quarters near their farms, rather than occupying transitory camp sites near hunting grounds or natural shelters like caves.

At its height, Atlantis was home to millions. Atlanteans built sturdy homes of wood, stone, and plaster. These houses were large family Manors and several generations of Atlanteans would live together under one roof. Between campaigns Atlantean soldiery were taken in, fed, clothed, and treated as family.

A Manor in the Mythic Age. Notice the "lush" around it, which indicates that it belongs to a Gaia player. 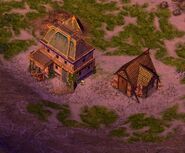 Unlike Houses, a unit may garrison inside a Manor.
Community content is available under CC-BY-SA unless otherwise noted.
Advertisement