The Mangonel is a ranged siege unit in Age of Empires II that can be trained at the Siege Workshop. It is primarily used against large groups of enemies. Its high attack and splash damage make it a powerful unit, especially against archers and slow-moving units. Its main offsets are its low projectile speed, minimum range, and tendency to harm friendly units caught in its blast. Mangonels can attack ground.

They are an exceptionally expensive unit (the total resources are higher than for a War Elephant), and they should be used and protected accordingly.

Mangonels in most circumstances need to be paired with other units. They are often employed in the late game with Halberdiers in choke points (to which the counter is the Champion), with Monks in early Castle Age siege pushes, and with archers on open maps against Skirmishers or other archers. They are also a key defensive unit. Its powerful attack can be devastating to most groups of enemy units, but it is advisable to watch them in battle to prevent friendly fire. Using the attack ground command is useful for Mangonels if the player can predict the movement of enemy troops.

The Mangonels can be employed defensively behind Castles, Walls, or Towers in order to avoid them being attacked by rams. They are also employed under Town Centers to protect the economy from archer fire.

Mangonels are often paired with ranged units since it is less likely that those units would be affected by the Mangonels' attack. They are also capable of dealing damage to Town Centers, problems which infantry and cavalry do not have, but archers do.

When pairing them with melee units, it is important to set those units to defensive stance in order to prevent them from wandering off and leaving the Mangonel vulnerable.

A popular tactic, especially on the map Arena, is to quickly advance to the Castle Age and pair Mangonels with Monks, as they cover each other's main weaknesses. Mangonels are great against ranged units like Crossbowmen, who can otherwise quickly kill Monks, while Monks can convert Knights (in small enough numbers), who are the bane of Mangonels. This strategy however requires intense micromanagement and is somewhat vulnerable to Light Cavalry and Eagle Warriors, who resist conversion, have an attack bonus against Monks, and can quickly close the gap to the Mangonels. The Eagle Warrior is particularly effective, since it also has an attack bonus against Mangonels and is less food intensive.

Mangonels are an excellent way to deal with masses of foot archers, Skirmishers, and Cavalry Archers, and serve as an equalizer when the opponent gets ahead in archer wars. One good Mangonel shot can turn the tide of a battle in this case. In comparison, Mangonels struggle against Conquistadors, Janissaries and Arambai, as their pierce attack is considerably higher than the Mangonel's pierce armor. In these cases, it is advisable to use multiple Mangonels or employ Skirmishers instead.

Mangonels are an excellent choice of siege unit in the Castle Age for several reasons:

On the other hand, they should be employed cautiously when Stable units are on the field, unless protected by a Castle, Pikemen, or Monks. On open maps like Arabia, these options might not make the investment into Mangonels pay off.

In archer wars in high level games, the primary counter to a Mangonel is another Mangonel, though they can fall to well micromanaged archers, by "splitting", with the formation keys.

Comparison to the Scorpion[] 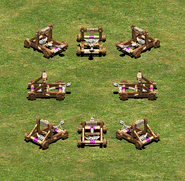 A group of Mangonels 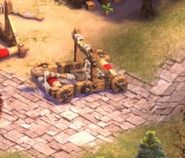 A Mangonel in the Definitive Edition

Render of the alpha Mangonel model