Age of Empires Series Wiki
Register
Don't have an account?
Sign In
Advertisement
in: Age of Empires III, Mercenaries, Commerce Age,
and 2 more

The Manchu is the mercenary version of the Cavalry Archer. It has a high rate of fire and an impressive amount of hit points. It also has a very high melee armor and base damage. All these factors combined make it an extremely effective counter to cavalry, without having to worry about micro-managing them or kiting. Unlike nearly every other mercenary, it takes the same amount of population space as its base unit; this allows it to be used even in the latest stages of the games without sacrificing military size, should it be available at the Saloon/Monastery.

This unit is of particular interest to the Chinese civilization. As China is unable to mass produce anti-cavalry, and the units it can mass are fairly weak, the Manchu (if available at the Monastery) can be trained to fill this usual hole in their composition, without sacrificing population space or draining limited wood supplies.

Unlike other units native to China, the Manchu speaks their own Manchu language (Manju Gisun)[1], an endangered language of Tungusic origin native to Manchuria and one of the official languages of the Qing dynasty. 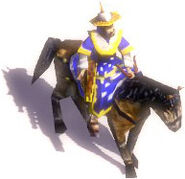 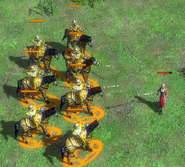