8 feet
The Man O' War is a Mythic Age Atlantean naval myth unit. It is available to worshippers of Helios, and resembles a gigantic version of the Portuguese man o' war (see Trivia).

The Man O' War fires lightning bolts rather like the Son of Osiris (but not nearly as deadly), enabling them to strike up to four targets at once. Although they deal hack damage, which most ships have little protection against, their attack speed is rather slow. They also have a large amount of hit points and are well armored. They are fairly powerful naval support units as their attack can kill units and destroy buildings near the shore as well. Overall they are mediocre naval units, difficult to counter with arrow and siege ships, but very weak against ramming ships. They are also quite expensive and take up a large amount of population space, limiting the amount that can be created. Ranged heroes near the shore are the best way to take Men O' War out. A cost effective way to counter them, if encountered far from land, is to use regular ships with Heroic Fleet researched.

This monstrous siphonophore was actually a collection of creatures that cooperated to move and feed and fight. The 100 foot long tentacles produced a toxin that is almost as potent as cobra venom which the organism used to stun prey. For defense the creature could generate and direct an electric bolt, like a stroke of lightning. Physalia mantalos propelled itself by raising and lowering its crest to catch wind like a sail. 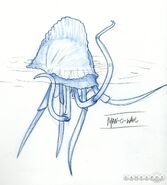 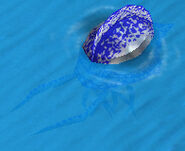