+2 vs Eagle Warrior
+2 vs Standard building

The Man-at-Arms is an infantry unit in Age of Empires II that can be trained at the Barracks once the Feudal Age is reached. They hold a strong advantage against most units in the Feudal Age, making them an effective unit at disrupting an opponent's economy.

As a military unit, the Man-at-Arms fills a similar niche to the Militia, being well-rounded enough to serve both as scouts and occasional raiders. Statistics-wise, they are better than the Militia when it comes to worker line harassment and base razing, though in practice whether or not they are efficient depends largely on the development status of one's enemy. As they are slow, they are particularly weak against Archers. Also, while somewhat effective against Scout Cavalry, they are susceptible to mobbing and will die very easily if outnumbered.

Men-at-Arms work best when paired with additional support troops. A good raiding party composition should be of around a dozen Men-at-Arms, some Skirmishers to counter enemy Archers, and optionally some Spearmen if the enemy employs a large number of Scout Cavalry (e.g., when playing against a Frankish AI). As Murder Holes is not available in the Feudal Age, their weakness towards Towers can be circumvented by zig-zagging towards the structures' bases where they cannot target one's units. If possible, having several of the player's own Archers mixed in can yield much greater raiding results.

Men-at-Arms should be upgraded as quickly as possible when transitioning towards the Castle Age due to the enemy's greatly expanded tech tree providing them with many effective counters.

The Militia line, with the Man-at-Arms seconds from the left.

The Militia line, with the Man-at-Arms second from the left, in the Definitive Edition. 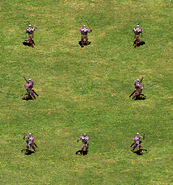 A group of Men-at-Arms.

A group of Men-at-Arms supported by Skirmishers raid an enemy town. 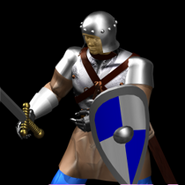 A render of the Man at Arms model.
Español
Community content is available under CC-BY-SA unless otherwise noted.
Advertisement