The Mameluke boasts some of the highest hit points for a cavalry unit (1,450 in any age, without upgrades). This is far greater than even the two other non-Lancer hand cavalry mercenaries (namely, Stradiots and Hackapells), though their attack is lower than both (around that of a Hussar). Naturally, this excessive durability allows them to best even anti-cavalry units, such as Rodeleros and Pikemen. With all hit point improvement upgrades (Comanche) and cards (Indian and Russian allies), the German Egyptian Mameluke is the unit and/or melee cavalry with the highest hit points, 2,465.

Besides training them as random mercenaries and Home City shipments, Mamelukes can be trained by the Ottomans through Mercenary Contractor politician, British or Ottomans by the Egyptian revolution or by the Ethiopian-Arab alliance. 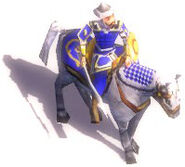 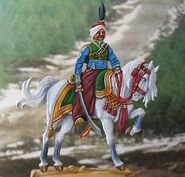 Reconstruction of a Mameluke on horseback

Arabian horse led by a Mamaluke, by Carle Vernet, 1815
Community content is available under CC-BY-SA unless otherwise noted.
Advertisement