The Mameluke is the unique unit of the Saracens in Age of Empires II. It is a Camel with a ranged melee attack and an attack bonus against cavalry.

Mamelukes can be upgraded to Elite Mamelukes in the Imperial Age.

Similarly to Throwing Axemen, Mamelukes are melee units, but they throw their scimitar for a range of 3. Due to their high speed (which makes them effective against foot-soldiers) and their natural strength against cavalry, Mamelukes are considered some of the best units in the game. This is offset by their high cost.

A well controlled group of these can take down any unit, except by higher number of ranged foot soldiers. Mamelukes are well rounded units suited for most combat situations.

When allied with Indians, Mamelukes benefit from the Indian team bonus that gives +5 attack bonus against buildings to Camel Riders. In team games if the player has an Indian ally he or she can use the Mameluke as a supporting unit that can take down some buildings in a siege as well as they can counter the opponents cavalry that can put in danger the players siege engines that are used against Towers and Castles.

Mamelukes work well when paired with regular Camels, Onagers and Cavalry Archers, all of which Saracens have above average (Siege Onagers with Siege Engineers and fully upgradeable Cavalry Archers without bonuses alone qualify as above average). They are also good when paired with the Saracen fully upgradeable Hussars to take down enemy Onagers, Bombard Cannons, regular archers and skirmishers, monks or even as a cheap meatshield.

Mamelukes are in the camel armor class as well as the Mameluke armor class, which means they actually take more damage from Elite Mamelukes (+1), Spearmen (+4), Pikemen and Halberdiers (+11), and Heavy and Imperial Camel Riders (+7). Mamelukes also take bonus damage from anti-archer attacks, which makes Skirmishers (+2/+3/+4), Huskarls (+6/+10), and even Persian-allied Knight-line (+2) effective against them to a reasonable degree, even though these units have low melee armor or cavalry armor class, meaning they take a lot of damage from Mamelukes.

Also, in The Conquerors and The Forgotten, before The African Kingdoms, camel armor class was the same as Ship armor class (fixed with patch 4.8). They also used to be in the cavalry armor class (+11). So, in addition to all normal anti-camel attacks, it received 1, 4, 11, 21, 7 and 7 extra damage from Elite Mamelukes, Spearmen, Pikemen, Halberdier, Heavy Camels and Imperial Camels, prior to the release of the Definitive Edition.

As Mamelukes are unique to the Saracens, only technologies that are available to them are shown in the following table: 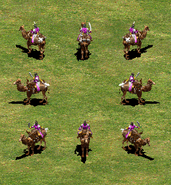 A group of Mamelukes

In this historically informed reconstruction, the Mameluke rides a horse instead of a camel as in-game. 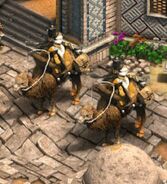 Mamelukes in the Definitive Edition

Three Mamelukes on horseback, by German artist Daniel Hopfer, from the early 16th century
Add a photo to this gallery
Retrieved from "https://ageofempires.fandom.com/wiki/Mameluke_(Age_of_Empires_II)?oldid=253039"
Community content is available under CC-BY-SA unless otherwise noted.