Race for the Rails

James Horan
Major Ryan Cooper is a hero unit in the Act III: Steel campaign in Age of Empires III . He fought in the War of 1812 and was remembered for his cavalry.

Cooper is assigned to protect Amelia whilst she and her Railroad Workers continue laying tracks towards California.

He becomes a good friend of Amelia and they work together to defend an American fort from the invading Mexican army. Amelia is lured into a trap by Pierre Beaumont, though Kanyenke and Cooper arrive to help her. Cooper travels with Amelia until he is attacked by Beaumont and two pet wolves in the Everglades, Florida.

He confronts Beaumont to convince him surrender but he was attacked by two White Wolves, Cooper manages to shoot one of them before being mauled and killed by the other. He was buried by Amelia in Florida.

Cooper attacks with a revolver that appears to be the Remington Model 1858 and a cavalry sword. Although he is an infantry unit, it is stated that he prefers to fight on horseback. He has the ability to train Hussars as if he were a mobile Stable, but cannot move and attack while doing so.

Like other heroes, Cooper has many hit points, but if he falls, he will collapse instead of dying and need to regenerate enough hit points to be rescued by allies. He can collect treasures but, unlike Explorers, cannot build Trading Posts and Town Centers, and have no special abilities.

The Military Promotion Home City Card promotes Cooper from Major to Colonel, increasing his hit points and ranged attack by 40%, and his melee and siege attack by 35%.

Overall, Cooper is a very effective infantry unit if handled carefully, however he is weak against Boneguards.

Major Cooper and Amelia Black on the Campaign Menu 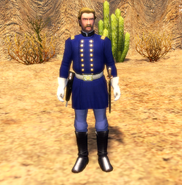