The Mahout Lancer is a melee heavy cavalry in Age of Empires III: The Asian Dynasties that is unique to the Indians and can be trained at Caravanserai and Galleon once the Fortress Age is reached, as well as the Agra Fort Wonder once it is upgraded to Delhi Gate. It is the strongest melee unit in the game.

The Mahout Lancers cost considerable resources and population, but have a high hand attack with good area effect, and a huge number of hit points. They are most easily compared to the French Cuirassier. The Mahout Lancer is a durable heavy cavalry unit that is good against non-heavy infantry such as archers, and artillery, much like other units of the same class.

Unlike the Spanish Lancer, it is not as effective against heavy infantry, but it can slay many before dying. Furthermore, unlike most other cavalry, Mahout Lancers have a high siege damage, as their elephants can ram over buildings, which makes them decent building killers in absence of artillery. The Indian Two and Three Mahout Lancer cards available in the Fortress Age may be worth adding to a deck. They also have elephant combat cards that increase hit points and damage.

Unlike the elephant cavalry in Age of Empires II, they are not slow. They have the same speed as some other heavy cavalry units, which is faster than infantry. The only drawback is its high cost and population slots, but if used properly, it can be very cost effective. Mansabdar units trained at the Charminar Gate also boost the attack and hit points of Mahout Lancers by 10%. This aura is very weak in comparison to Unction for any players wishing to use aura effects.

Note: Elephant population can be decreased by a single point through use of the Professional Handlers Home City Card, although the Mansabdar Mahout's population cost is only reduced to 13 as per the card's effect.

While Mahouts are incredibly powerful, they do suffer from a few weaknesses. Firstly they take an enormous amount of population. As they actually have a lower base damage than Hussars or Cuirassiers, they can struggle vs an equal population of most units, with the exception of the units they hard counter. Secondly, they are very poor vs Villagers, having a negative multiplier despite their underwhelming base damage. For perspective, a single Honoured Steppe Rider has a higher damage vs a single villager. In late stages of the game, Mahouts should primarily be replaced with either Sowars, consulate cavalry (Gardeners, Gendarmes, etc), or Jat Lancers.

Countering Mahouts in the earlier stages of the Fortress age can be quite difficult due to their exceptional hitpoints (similar to a Mameluke shipment). A mixture of heavy cavalry and either heavy infantry or ranged cavalry will most likely be required to take them down.

Note: Trample Mode does nothing except slow the unit down; it does not increase area or reduce damage, and is entirely useless.

The Mahout Lancer is automatically upgraded to Disciplined (+20% hit points and attack) in the Fortress Age.

Imperial Service (passive): The Mansabdar Mahout increases the hit points and attack of Mahout Lancers in a radius of 24 around them by 10%.

As (Mansabdar) Mahout Lancers are unique to the Indians, only technologies that they have access to are shown in the following table:

As (Mansabdar) Mahout Lancers are unique to the Indians, only their cards and other civilizations' TEAM cards are shown in the following tables: 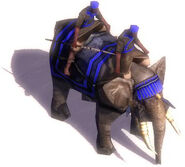 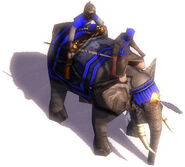 An in game Honored/Exalted Mahout Lancer 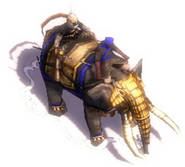 An in game Mansabdar Mahout Lancer