Mahi-mahi are saltwater fish featured in in Age of Mythology and Age of Empires III.

Mahi-mahi yield unlimited food, just like Perches and Salmon. They are featured mostly on warm water maps usually set in the Mediterranean, such as Archipelago and Team Migration.

This warm-water, marine fish has many names, including dorado and dolphin (not to be confused with the marine mammal). They are surface, pelagic (open ocean) fish that prefer blue water and are often found near rafts of Sargassum algae. Mahi are yellow and green in color with blue and white spots. The larger male, or "bull" (as contrasted to the smaller "chicken" mahi) gains a prominent forehead and can weigh in excess of 90 lbs.

Mahi are popular gamefish as they can leap spectacularly into the air when caught on a hook. Mahi grow very fast for large fish (and live for only a few years) and therefore can serve as a relatively guilt-free seafood item at a time when many fisheries are facing depletion.

Early Minoan mosaics depict mahi mahi in precise detail, indicating that the Greeks have been catching this fish for centuries."

Mahi-mahi (known in-game as Mahi) can be found in two maps in Age of Empires III, both in the tropics. They feature in the Caribbean (where they coexist with Tarpons) and Hispaniola maps.

As with all other fish species, they yield 500 food.

“Mahi-mahi” is a Hawaiian word meaning “strong-strong.” Mahi are also known as dorado or dolphin fish although they share no relation with that mammal. These fish live in tropical and subtropical waters and are very popular on menus due to their firm and sweet flesh. Their growth rate is high, which allows their populations to be replenished more quickly than many commercial fisheries.

Mahi-mahi are brilliantly colored fish that can live up to four years. While alive they flaunt a rainbow of colors from gold to bright blues and greens. Upon death their brilliant colors fade until they are a uniform grayish-yellow."

Mahi-mahi as they appear in Age of Mythology

Mahi-mahi, close to a shore in Hispaniola 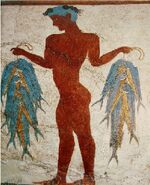 A Minoan fresco, depicting a fisherman with mahi-mahi, as referenced in the Age of Mythology history section.

The Mahi-mahi's history portrait
Add a photo to this gallery
Retrieved from "https://ageofempires.fandom.com/wiki/Mahi-mahi?oldid=227864"
Community content is available under CC-BY-SA unless otherwise noted.