The Magyar Huszar is the unique unit of the Magyars in Age of Empires II HD: The Forgotten. It is a light cavalry unit with an attack bonus against all siege weapons.

As their initial gold cost can be removed by researching the Corvinian Army technology, Magyar Huszars are considered trash units.

Magyar Huszars are comparatively cheap. Despite this, they have a considerable amount of attack, are fast, and have an attack bonus against siege weapons, making them an ideal counter to siege units. Also, they attack quickly, striking once every 1.8 seconds. In the cavalry branch, that value is only matched by Knights and Cataphracts. They also train fast, making the regular Hussar as good as redundant for the Magyars.

In combat against melee units, however, the Magyar Huszar's lackluster attack and armor makes it almost impossible to defeat anything in one-to-one combat. But considering their low cost, they still remain relatively cost effective against most of them nevertheless.

Their low cost, high speed, and decent attack make them ideal for raiding. The Hussar gives a competition here because of the latter's massive Line of Sight, ease of creation at Stables, and cheaper cost.

Comparison to the Light Cavalry/Hussar[]

As Magyar Huszars are unique to the Magyars, only technologies that are available to them are shown in the following table: 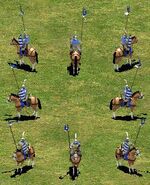 A group of Magyar Huszars 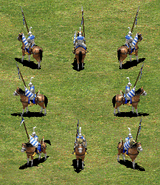 Magyar Huszar as of patch 4.4 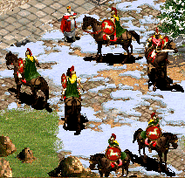 A depiction of a real-world Magyar Hussar 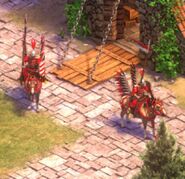 Magyar Huszars in the Definitive Edition

Magyar Huszar in the HD Edition and Definitive Edition