The Horns of Hattin
Lord of Arabia is the second scenario of the Saladin campaign in Age of Empires II: The Age of Kings. It is based on the Crusader raids on the Red Sea (1181-1183 A.D.).

The Holy City of Medina. Year fifteen of my capture...

Volumes have I filled with my fatigued writings. Lord Saladin reads them only rarely. He speaks of greater events yet to come.

The political boundaries in this endless desert have shifted as a result of three Crusades. Four Crusader states now exist in the Holy Land.

After the Saracen victory in Egypt, the Crusader leaders realized that Saladin was worthy of their concern. They were quick to suggest a treaty.

I hoped that with peace at last upon us, I would be returned to my own folk, but this peace, so short-lived, is already broken.

And it is not Saracen, but Crusader that has violated his word of honor. Reynald de Chatillon, a wicked French knight, has been raiding Arab territory in defiance of the treaty.

He attacks trade caravans, and his pirate ships threaten the Saracen holy cities of Medina and Mecca. Saladin, in his fury, has sworn to kill Reynald with his own hands.

A villainous pirate, Reynald de Chatillon, has violated peace treaties with the Saracens and is attacking the holy cities of Aqaba and Medina. To win, you must defeat Reynald's Raiders (Cyan) and Reynald's Pirates (Blue) while avoiding his Bandits (Red). You automatically lose if the Town Center in Aqaba or Medina gets destroyed. In this scenario, you cannot advance to the Imperial Age.

Of your two main opponents, Reynald's Raiders will attack you the most often. Their base is located in the northeast, and they cannot advance beyond the Feudal Age (Notes: In the Definitive Edition, this has been changed. Reynald's Raiders will advance to the Castle Age (around 20 minutes after game start on moderate difficulty). They produce Crossbowmen, Elite Skirmishers, Knights, Onagers, Battering Rams and Light Cavalry.). Their forces consist almost exclusively of Archers and Skirmishers, though they will have a few other units (Knights and a Battering Ram) at the beginning. Reynald's Pirates, unsurprisingly, have a formidable navy. They will advance to the Castle Age and then to the Imperial Age before attacking with Galleons. Although their base is on an island in the far west, they will launch frequent land attacks as well. These comprise heavy cavalry and Onagers. Reynald's Bandits are a ragtag group of Knights and Crossbowmen. They cannot create units and their main purposes are to harass Trade Carts and guard resources.

Your allies are Aqaba in the north and Medina in the east, sending Trade Carts to each other's Market. Although it's recommended to keep them alive (since your allies will tribute you gold as they generate it), realistically you have more urgent priorities so it's unlikely you'll be able to dedicate much of your attention to them. Your enemies won't threaten Medina, but will launch one or two major attacks on Aqaba near the beginning. Even if all the Trade Carts are gone, you may tribute wood and gold for them later so that they will create new Trade Carts.

Immediately upon starting the scenario, research Cartography. This will allow you to see what your allies can, which will help reveal a good portion of the map and help you defend them. Next, create more Villagers (aiming for at least three on each resource, plus a few more to build and repair). Your own base has gold, deer, and forage bushes. Medina has stone, gold, and sheep. Your lumberjacks can work near your base for now, but you'll eventually want to move this operation to the trees just north of Medina as it's safer and you'll be able to save on stone later on. Build Houses as necessary.

You start without any major buildings other than a Market and a Town Center. The first one you'll want to build is an Archery Range. You can then create some Archers (about 5-10) and garrison them inside Aqaba's Town Center. Your starting military units (Light Cavalry and Camels) are best employed defending your own base from early attacks, but you will soon need to send them to Aqaba to deal with a Battering Ram and some heavy cavalry. After this first attack is dispatched and the Town Center is garrisoned with Archers, Aqaba should be relatively safe for a while. You can send a Villager there later on to repair damages and add some of your own buildings, but for now you should focus on your own base.

You should have a decent stockpile by now, and can invest in economic technologies. The top priorities should be fortifying your base with Stone Walls and Gates, as well as advancing to the Castle Age. Add a Stable and Blacksmith when you can. Walling up will take some time and it will be difficult to seal all of the holes, as you have a large perimeter. Once you've reached the Castle Age, create a few Knights to help defend. Saracen heavy cavalry is considered terrible, and its reputation is well-deserved: of the original thirteen Civilizations, the Saracens are the only one unable to research the critical Cavalier upgrade. However, this disadvantage only comes into play in the Imperial Age. In fact, a Saracen Knight is as good as a Frankish Knight once Bloodlines has been researched. Knights are strong and versatile, working well against most units your enemies will throw at you.

Reynald's attacks will soon be getting more serious, with his pirates making their first appearance, so improving your defense is essential. Build Castles near your walls (inside or on the outskirts), along with a University to research Murder Holes. You'll need to use your Market to acquire the necessary stone. Invest in Masonry, Fletching, Bodkin Arrow, Ballistics, Husbandry, and Fortified Wall as well. The Crossbowman upgrade will improve your defenses in Aqaba. Counter the pirates' Cavaliers with Camels or Mamelukes, the Saracens' unique unit, where necessary. However you can also try using your Monks to convert a few Cavaliers for your own use, as they can be very useful for you to defend and even go on an offensive. The Galleons are more a nuisance than a credible threat, but their damage can add up if they're allowed to stay intact. Watch Towers or Guard Towers are effective if placed near the water, but if the enemy warships accumulate you may need to build a Dock and some Fire Ships to get rid of them. You may also try converting a few Galleons whenever you have the opportunity, as Galleons is actually the upgraded ship from War Galleys which is just what you can create in this scenario.

After all is said and done, Reynald's Raiders will be rendered essentially harmless and Reynald's Pirates won't give you much trouble either. You now have time to construct the rest of your buildings (add a Monastery and a Siege Workshop), research more economic technologies if you haven't already, completely upgrade your army, and search for more resources. There's a relic near Aqaba due north of your Market, and it's worth collecting. There is stone in the far north, as well as across the river west of Aqaba. You can also find a gold mine there. However, all three of these resource sites are guarded by Reynald's Bandits so you'll need to go on the offensive and displace them if you want these resources.

Your civilization's specialty is its camels, including the Mameluke, as well as its navy. You'll use both in this scenario, but for now focus on land units. Create 10-15 Mamelukes, Light Cavalry, and Cavalry Archers. The latter two units are good for raiding, and the Mamelukes are versatile soldiers that are very effective against cavalry. Leave a few Knights and Mamelukes back in your base for defense. Add five Battering Rams for knocking down defensive structures, five Scorpions to deal with massed enemy units, and five Monks for healing and conversion. Be sure to research Redemption so you can convert buildings, as this ability will come in handy.

When you're ready to attack, set control groups and destroy one of the enemy Gates with the rams. Light Cavalry are effective against all of their units, and Cavalry Archers will help take out enemy Villagers. Attack the Town Center as well as towers where necessary using the rams. The raiders will resign if you can kill all of their Villagers. Some may try to escape, so search for them with your Light Cavalry - they won't have gone too far. After you defeat his raiders, Reynald himself will appear briefly to poke at a Trade Cart before vanishing.

Once Reynald's Raiders have been defeated, you can use your army to get rid of any bandits and capture the rest of the resources. You do not have to defeat Reynald's Bandits to win the scenario, so don't worry too much about this (In the Definitive Edition, the bandits must be defeated). Reynald's Pirates also have a Dock and Guard Tower on the mainland that you should destroy.

You'll now need to build a Dock and use whatever space you have left in the population cap to build ships. You'll need enough Transport Ships to carry your entire army. Saracen Transport Ships can carry ten units, plus an additional five after you've researched Careening (In the Definitive Edition, the player can garrison up to 20 units in each ship). Research all other technologies and upgrades at the Dock, then build several Fire Ships to take out enemy Galleons and a few War Galleys if you have room. These are helpful for sinking enemy Fishing Ships. Move your navy to Egypt (in the west, where the Pirates are based) and unload. The pirates have a Town Center, a Castle, and several towers on this island and they'll attack with heavy cavalry as well as Onagers. Attack the dangerous buildings with the rams and level or convert all military buildings, particularly the Docks. The pirates might not resign after you kill all of their Villagers. If they do not, search the seas for any remaining ships and sink them. There may also be some Villagers wandering around on the mainland. It might take a while to track down all of the enemy units since you can't research Spies in this scenario.

By following this strategy, the level can be beaten in 15 minutes (Note: This no longer works in the Definitive Edition as there is no space to drop a Town Center): 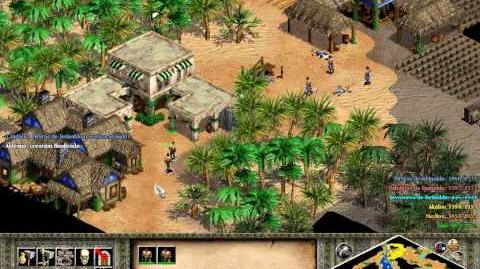 Although I am still a prisoner, Saladin and his generals dine with me. Over meals we discuss mathematics and astronomy. I never imagined a race of desert folk could be so wise.

Baghdad, the Saracen capital, is the most civilized city in the world, with free hospitals, public baths, a postal service, and banks with branches as far away as China.

But as we eat, talk inevitably turns to war. Reynald's pirate vessels now rot at the bottom of the Red Sea. His raids have stopped. Reynald has escaped, but I suspect Saladin shall neither forgive nor forget.

Full map
Add a photo to this gallery
Retrieved from "https://ageofempires.fandom.com/wiki/Lord_of_Arabia?oldid=315299"
Community content is available under CC-BY-SA unless otherwise noted.