Age of Empires Series Wiki
Register
Don't have an account?
Sign In
Advertisement
in: Age of Empires III, Haudenosaunee, Houses,
and 4 more

The Longhouse is an economic building in Age of Empires III: The WarChiefs that is unique to the Haudenosaunee and replaces the House. It supports more population than Houses, but costs more and has a lower build limit.

The Longhouse costs more and has a lower build limit (14) than Houses, but less than the British Manor, costing just 125 wood. But the feature that makes it easier to build up Longhouses without spending much resources is that the Haudenosaunee have Travois which can construct most buildings for free. The Longhouse can research certain Arsenal technologies with the "New Ways" Home City Card and gains the ability to shoot enemies with a weak attack with the "War Houses" card.

The Longhouse is quite useful to the Haudenosaunee to expand their economy and military quite quickly, due their ability to hold more population, and is also an option to wall a small town with only Longhouses and the card that gives to them the ranged attack, although they deal low damage. It shares a lot of similarities with the Chinese Village, in that it can attack with the "War Houses" card, but the Village can spawn sentries and Irregulars (with the "Village Defenses" card) and train livestock, while the Longhouse can only research Arsenal technologies. An other difference, when the cards have been sent, between those two is that the Village can garrison villagers, and it only shoots if villagers have been garrisoned, like the Town Center, as opposed to the Longhouse, which can always shoot, but has a shorter range and higher damage with Town Ceremony.

The Earth Mother Ceremony can help to expand the population room a little bit without Longhouses, but it is not enough to room a lot of units.

As Longhouses are unique to the Haudenosaunee, only technologies that they have access to are shown in the following tables:

As Longhouses are unique to the Haudenosaunee, only their cards and other civilizations' TEAM cards are shown in the following tables: 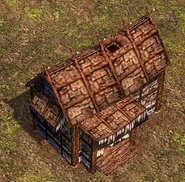 A Longhouse before the Industrial Age
Community content is available under CC-BY-SA unless otherwise noted.
Advertisement