The Longbowman is an archer in Age of Empires III that is unique to the British, which replaces the Crossbowman, and can be trained at the Barracks, Fort, and Galleon.

British Longbowmen possess a powerful long range attack and fast rate of fire. Longbowmen can be useful raiding units in the early game due to their range, which is one of the highest in the game, and high damage output. Archaic yet effective, these skilled archers are more expensive than Crossbowmen but shoot twice as fast.

However, most bow units such as the Longbows have to set up and draw for 0.98 seconds before firing, as compared to the 0.45-0.49 of most ranged units. This makes it more difficult for these British units to maneuver and fire at the same time. This option can be an alternative comparable to rifle-wielding Skirmishers in the midgame, although there are sizeable downsides because Longbowmen are less durable and do not benefit from anti-infantry multipliers or rifle upgrades from the Arsenal (Counter Infantry Rifling, Flint Lock, or Paper Cartridge).

There are two more civilization-based considerations that affect their strategy. Their wood cost can interfere with spending the same resource on a Manor boom strategy, particularly as wood is usually a slow resource to gather. Additionally, Longbowmen lack the 15% Damage, Hitpoint and Combat upgrade cards available to the Musketeer.

Longbowmen are effective against enemy infantry units such as Musketeers and melee infantry, but actually most capable against Ranged Cavalry. They generally lose to melee cavalry and artillery units. Properly guarded by Redcoat Musketeers from cavalry, the bowmen can inflict major damage on enemy troops from afar. They have a range of 22 (26 with the Yeomen card), giving them the second longest range of any infantry in the game (For comparison, Musketeers have half the range at 12 units, and only the Aztec Arrow Knight has a longer range at 30). This allows them to strike Settlers from afar.

By sending the "Rangers" Home City Card, they can be fully replaced with Rangers at the Barracks, Home City and on the map. Rangers are a ranged gunpowder infantry unit similar to the Skirmisher, and they do a better job countering heavy infantry such as Musketeers, but have less range and only half the Rate of Fire.

As Longbowmen are unique to the British, only technologies that they have access to are shown in the following table:

As Longbowmen are unique to the British, only their cards and other civilizations' TEAM cards are shown in the following tables: 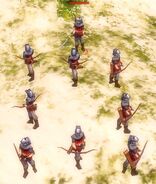 Longbowman, use swords in melee attack 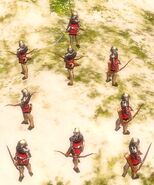 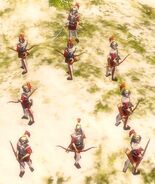