The Longbowman is the unique unit of the Britons in Age of Empires II. It is a foot archer with a very long range.

Longbowmen can be upgraded to Elite Longbowmen in the Imperial Age.

Longbowmen are the archers of England and Wales, boasting powerful damage and a very long range. These soldiers are often instrumental for Briton victory.

Regular Longbowmen have the same range as Crossbowmen, but their Elite counterpart comes with +1 attack, range, and pierce armor in comparison to the Arbalester. Furthering their range with Blacksmith upgrades, Yeomen, and the Britons' civilization bonus (+1 range in the Castle Age and +1 in the Imperial Age (+2 in total)), Elite Longbowmen can get as much as 12 range, an unprecedented value among archer units. It enables them to outrange Castles, Towers, Onagers, Galleons, as well as all other archer units.

Longbowmen work best in a group. While a single Longbowman does not present much of a threat, a group can be a deadly force as they can mow down opposing forces from long range before they can even attack. Longbowmen firing from behind Walls can prove valuable for base defense.

With the protection of melee infantry or cavalry, Longbowmen can hold their ground against most units, taking a fearful toll of enemy troops while supporting the frontliners. Without protection, a group of them can instead perform hit-and-run techniques, killing the closest enemy while backing up constantly. Of course, they cannot do that as effectively as Cavalry Archers, and will struggle especially against cavalry.

It is recommended to set Longbowmen to Stand Ground stance. That way, they will not disrupt the formation and avoid rushing into situations they cannot handle.

Since the Britons lack Thumb Ring, they fire slower than other civilizations' archers and lack the 100% accuracy, which can be a considerable disadvantage. On the other hand, when focus-firing individual targets as a group, lacking Thumb Ring can prevent overkilling a target. Most arrows will strike their target, while stray arrows may damage nearby enemies. This inaccuracy can grant Briton archers an Onager-like firing pattern.

When facing massed heavy siege weapons like Siege Onagers or Heavy Scorpions, archers' long range can be used to destroy one siege weapon at a time, instead of letting them fire at will. Otherwise, once the siege engines come into firing range, they will quickly flatten the archers with a few shots.

A group of Longbowmen can be used as a siege option if the player is teamed with a Saracen, as the Longbowmen get additional attack bonus against standard buildings and can take them down more quickly. Teutonic Castles, Korean towers, and Turkish Bombard Towers are the only defensive structures capable of returning fire. Still, Trebuchets should always be brought to sieges, especially since Warwolf was introduced in The Forgotten.

As archers, Longbowmen have the typical weaknesses. Without protection, they are easily overpowered by mass cavalry, Huskarls, Ghulams, and Eagle Warrior charges.

Skirmishers and Genitours are of course an issue as well, despite the fact that the Longbowmen can by far outrange them.

And, of course, siege weapons are a heavy threat, but the Longbowmen fare far better against them than all other archers, especially when massed, because they can take them out (apart from Bombard Cannons) from a safe distance without coming under fire.

Rams are also effective against Longbowmen, as the player can put them between their own Skirmishers/archers and the enemy, thereby soaking up the damage (as units auto attack the nearest foe). This is most useful in late-game combat with large armies on both sides; players generally will not order their archers to focus-fire individual targets at this point, since there will be too much overkill.

They cannot be killed in one strike in the Castle Age, but Coustilliers are still a great threat for Longbowmen, because of their charge attack, which is extremely devastating against archers. In the Castle Age, while they cannot strike them down in one hit, they will greatly wound Longbowmen. In the Imperial Age, the Elite Coustillier has better charge attack and base attack, and can kill the Longbowman in just one hit with charge attack when the Burgundians have only Iron Casting researched.

As Longbowmen are unique to the Britons, only technologies that are available to them are shown in the following table: 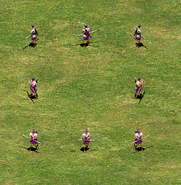 A group of Longbowmen 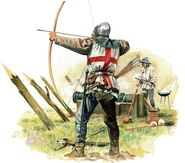 An artwork of a real longbowman. Notice that he fastened the quiver of arrows on his belt instead of wearing them on his back like in the game.

Longbowmen in the Definitive Edition 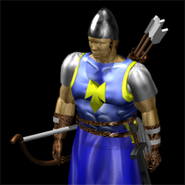 A render of the Longbowman model

A render of the alpha Longbowman model 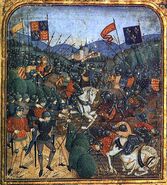 Longbowman in the HD Edition and Definitive Edition