The Longboat is the second unique unit of the Vikings in Age of Empires II. It can be trained at the Dock once the Castle Age is reached. It is a warship that fires multiple arrows.

Longboats can be upgraded to Elite Longboats in the Imperial Age.

The Longboat, like the Chu Ko Nu and the Kipchak, fires multiple arrows with each attack: both Elite and non-Elite Longboats fire four arrows per attack. Much like the Chu Ko Nu and the Kipchak, only the first arrow does full damage and benefits from archery upgrades while the rest only do 1 damage. Unlike the Chu Ko Nu, but like the Kipchak, the Longboat fires all its arrows at the same time and not in quick succession. Due to how armor and damage work in Age of Empires II this translates to an additional +3 damage provided they all hit. Longboats defeat War Galleys in one-on-one combat. Elite Longboats defeat Galleons (just barely, though) as well. They are best used against multiple enemy ships. They build significantly quicker than most other warships, making spamming them an effective tactic against other navies. By quickly building a force of Longboats once the Vikings hit Castle Age, the player can overwhelm and destroy the enemy's navy and potentially prevent the enemy from getting back onto the water, avoiding a war of attrition altogether.

The Longboat is weak against Mangonels and Bombard Cannons firing from the shore, so they should be kept well out of range. Turtle Ships may also present a problem for the Longboats as they are heavily armored but if properly micromanaged and in sufficient numbers, Longboats can cope with them; one should put their Longboats in Staggered formation against Turtle Ships, as the Turtle Ship's attack has a small blast radius that can damage multiple Longboats at once if they're clumped up. Fire Ships are effective against Longboats and the most common counter, but will struggle once the Longboats reach a critical mass. Caravels are a significant threat to Longboats when fleet sizes get larger; while the Longboat beats a Caravel one-on-one, the Caravel's line attack will easily hit multiple Longboats at once if they clump up. Elite Longboats will beat Thirisadai with equal resources thanks to their extra arrows, but lose one-on-one.

Since the Longboat can shoot multiple arrows, a group of them can rain a shower of arrows on to the target, so Longboats can be used for shore bombardment, and are better used in large groups. Longboats are also excellent escorts for other naval vessels like the Transport Ship and Cannon Galleons. As the Vikings lack Fire Ships, their navy should be built around Longboats as they are easily massed, have good movement speed, and a decent attack.

Comparison to the Galleon[]

As Longboats are unique to the Vikings, only technologies that are available to them are shown in the following table:

A group of Longboats 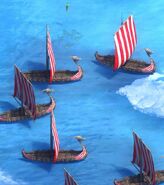 Longboats in the Definitive Edition

Longboat in the HD Edition and Definitive Edition
Español
Community content is available under CC-BY-SA unless otherwise noted.
Advertisement