+6 vs Eagle Warrior
+3 vs Standard building

The Long Swordsman is an infantry unit in Age of Empires II that can be trained at the Barracks once the Castle Age is reached.

Like all members of the Militia line, the Long Swordsman's main advantage does not lie in individual strength but their ease of creation and general cheapness in terms of creation cost.

Long Swordsmen are the basic infantry units in the Castle Age. They are moderately strong, being able to defeat all standard Castle Age units but the Knight and Cavalry Archer in one on one combat. Like all basic infantry, Long Swordsmen also have an attack bonus versus standard buildings, which added to a high melee attack, gives them a use in raiding. They are weak against almost all archers, heavy cavalry, Mangonels (if they are unable to close the distance), and vulnerable to Scorpions and Monks, but good against Pikemen, Light Cavalry, Camel Riders, Skirmishers, Eagle Warriors, and Rams.

However, because of their general weakness to ranged units (and buildings) and low mobility (unlike cavalry), Long Swordsmen see little use outside as a counter to trash units, Camel Riders, and Eagle Warriors. And although they are cheap in gold, they cost a substantial amount of food, which is not worth it due to their low durability and slowness. One thing to be considered is that two Long Swordsmen can beat one full health Knight, being very favorable. However, in general situations, the player is much better producing Pikemen as a counter, mass producing Crossbowmen, or using the food economy to boom or get to the Imperial Age.

A special case for the use of Long Swordsmen would be playing against Goths, as an archer civilization with no access to strong Knights. Then, it would be a good move to mass Long Swordsmen, due to having relatively good trades with Huskarls, and because of their subsequent upgrades of Two-Handed Swordsman and Champion, both faring even better against Elite Huskarls.

The Militia line, with the Long Swordsman in the middle.

The Militia line, with the Long Swordsman in the middle, in the Definitive Edition. 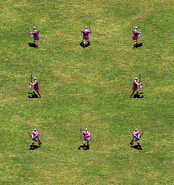 A group of Long Swordsmen. 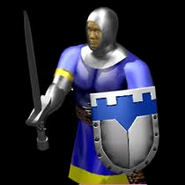 A render of the Long Swordsman model.

An official artwork featuring (from left to right) Jacqueline of Hainaut, a Long Swordsman using a shield with the arms of the Norman Hauteville family, two Serjeants and a Coustillier
Español
Community content is available under CC-BY-SA unless otherwise noted.
Advertisement