Age of Empires Series Wiki
Register
Don't have an account?
Sign In
Advertisement
in: Age of Empires II, Infantry heroes, Lords of the West

4
Llywelyn ap Gruffydd (c. 1223 – 11 December 1282) is an infantry hero unit in Age of Empires II: Definitive Edition - Lords of the West. As a hero, he cannot be converted and can regenerate health.

He appears in the scenario Of Castles and Kings in the Edward Longshanks campaign as an enemy player and unit.

Llywelyn ap Gruffudd (c. 1223 – 11 December 1282), sometimes written as Llywelyn ap Gruffydd, was Prince of Wales (Latin: Princeps Walliae; Welsh: Tywysog Cymru) from 1258 until his death at Cilmeri in 1282. Llywelyn was the son of Gruffydd ap Llywelyn Fawr and grandson of Llywelyn the Great, he was one of the last native and independent princes of Wales before its conquest by Edward I of England.

On Palm Sunday in 1282, Llywelyn's brother Dafydd ap Gruffydd attacked the English at Hawarden Castle and then laid siege to Rhuddlan. The revolt quickly spread to other parts of Wales, with Aberystwyth castle captured and burnt and rebellion in Ystrad Tywi in south Wales, also inspired by Dafydd according to the annals, where Carreg Cennen castle was captured. Llywelyn, according to a letter he sent to the Archbishop of Canterbury John Peckham, was not involved in the planning of the revolt. He felt obliged, however, to support his brother and a war began for which the Welsh were ill-prepared. 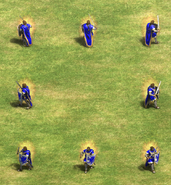 Many views of the hero unit.
Community content is available under CC-BY-SA unless otherwise noted.
Advertisement