Two civilizations do not have any access to the fattening capability because their Villagers cannot gather food from Herdables. The Indians have the Sacred Field instead of Livestock Pen that increases the experience generation rate of their livestock; the Japanese may use Shrines to generate resources over time that can be increased by huntable animals and livestock.

Livestock Pens effectively cut the fattening time of most livestock down from 30 minutes to around 5-6 minutes. However, they are less common than gathering food directly at the Mill, especially in Supremacy. This is due to the more complicated mechanics of gathering from herdables, such as the upfront cost of invested food that cannot be used to train units.

If there is a 5-6 minute period for livestock to be fattened at the pen, such as during a Treaty match where military units are not required, livestock can be used as a worthwhile investment to multiply one's food. It is easy to adjust the amount of food and settler time invested by training more livestock units. The Fulling Mills card indirectly relates to this building by making it 4× faster to gather from herdables, saving villager time, reducing waste to spoilage, and freeing them to do other tasks.

The Cow and Llama requires the (Llama) Ranching Home City Card to be trained at Livestock Pens. 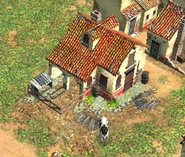 A Livestock Pen with Cows
Community content is available under CC-BY-SA unless otherwise noted.
Advertisement