All Lions in the Age of Empires series have manes and are, as a result, male.

2-4
Lions are a very dangerous food source in Age of Empires and are the most dangerous natural unit in the game. Their fast speed and high attack rate makes them too dangerous for a single Villager to gather from. Between two and four Villagers are recommended, although the less are used the more damage one of them will take (with the possibility of one dying).

Lions also appear as tame and controllable, they're also befriended to the players (if you choose the color of your team), although they only appear in the Scenario Editor. Both the game image and the icon are identical to that of the Wild Lions.

AI Lions are quite aggressive. They will often attack Gazelles on their own, and attack units wandering too close to them. A single Villager will kill it, although they sometimes spawn in pairs, often killing the unwary Villager.

A Lion in the Definitive Edition

2-3
The Lion returns in the The African Kingdoms expansion pack. Like other wild animals, it appears in several areas around the map and is of hostile nature. It holds no food and attacks Villagers and even some military units on sight. Even though, it will die to anything with the lone exception of a Villager without the Loom upgrade. Lions mostly appear on African maps. 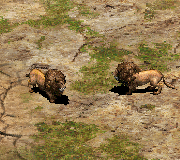 3-5
The Lion is a huntable animal, but it will also attack any Villager that wanders too close, and doesn't provide much food compared to the cost of taking it down.

10
The Lion is a powerful Treasure Guardian found in Age of Empires III: The Asian Dynasties on Asian maps. It is a much more powerful version of the Tiger and is dangerous to defeat with Explorers.

Lions are found in maps such as Mongolia, Deccan, Yellow River, and Silk Road. A pet version of the Lion named Lhota the Pet Lion is available to the Indians from a Home City Card sending two Lions. 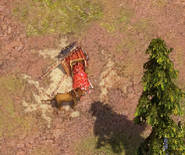 A Lion guarding Treasure in Deccan

Two Lhotas can be shipped from the Indian Home City in the Discovery Age to provide valuable support to the Brahmins, taking down most Treasure Guardians with only a few hits.