Winged Hussar (Lithuanians and Poles only)

The Light Cavalry is a light cavalry unit in Age of Empires II that can be trained at the Stable once the Castle Age is reached. It is a fast unit with resistance to conversion that excels at taking down Monks and siege weapons, and is good vs archers. Its combat abilities against other melee units such as heavy cavalry units, camels, or infantry is severely limited, though.

Light Cavalry cost only food to create, making them a viable alternative if the player is low on other resources. The entire Scout Cavalry line has the same Line of Sight. They all receive a +2 bonus to their Line of Sight upon every Age advance, for a total of 10 Line of Sight in the Imperial Age.

Light Cavalry are available to all civilizations except for the Aztecs, Incas, Mayans, and Teutons.

The Light Cavalry have an exceptionally high Line of Sight, moderate hit points and moderate better combat skills. Against groups of siege weapons or low number of archers, they have the speed and attack needed to run down and kill groups, though combat with other more armored melee units should be avoided.

It is better used in conjunction with Crossbowmen and Cavalry Archers, to protect friendly archer units, as a meat shield against enemy Knights or as a direct counter against enemy Elite Skirmishers and siege weapons. As Light Cavalry have an innate conversion resistance and attack bonus against Monks, they can be used for countering enemy Monks, which are much more expensive to produce. Light Cavalry may often kill two Monks before being converted, even more with Faith researched. Because of this, even a player going full Knights or full Elephants should consider adding Light Cavalry to the mix if enemy Monks are predicted or seen as a reaction, using them solely and directly as Monk killers (even if they perish after the kill it is still good value).

Since Light Cavalry only costs food it is considered a trash unit and when gold is running low it takes the place of the heavy cavalry in trash wars at the late game. 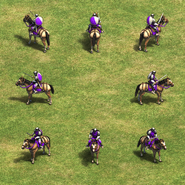 A group of Light Cavalry

A group of Light Cavalry attacking Onagers and Monks 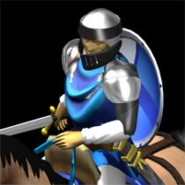 A render of the Light Cavalry model

The Scout Cavalry line, with the Light Cavalry being the second from the left