Age of Empires Series Wiki
Register
Don't have an account?
Sign In
Advertisement
in: Age of Empires III, Artillery, Industrial Age,
and 2 more

The Light Cannon is an artillery in Age of Empires III: The WarChiefs that is unique to the Haudenosaunee and can be trained at the Siege Workshop once the Industrial Age is reached. It combines the functions of a Falconet and a Culverin.

The most notable trait and largest disadvantage of the Light Cannon is that it is only available in the Industrial Age, unlike European artillery. This can be quite a restriction in a fast-paced battle.

It does excellent damage against artillery and buildings and is also good against ships. It can also do peripheral damage to nearby targets. The Light Cannon is strong against ships, infantry, and other artillery. Due to their effectiveness against a wide array of units complimented with a powerful range (most standard artillery have 26 or 28), they are devastating against enemy armies if left unchecked. If the "Siege Discipline" card is sent, the Haudenosaunee can easily mass a large number of these without a major penalty to the population space.

Another advantage is that, unlike European artillery, they spend no time switching between Bombard and Limber mode. Both of the modes have equal speed, and if for any cause they have changed mode, they can change them instantly, allowing them to always remain both mobile and ready for combat. As of update 61213, Light Cannons no longer have a Limber mode, only a Bombard mode.

The main disadvantages of the Light Cannon are its slower rate of fire, less damage, and smaller damage area than a Falconet (making it for example only 31% as effective against infantry as a Falconet, not factoring in the reduced damage area), as well as its fewer hitpoints than either a Culverin or a Falconet, while costing almost the same amount of resources to train.

Light Cannons are arguably one of the best anti-artillery counter units in the game: Culverins slightly outrange them, but are highly situational and overspecialized. The Light Cannon's flexibility and great range makes it essentially a better Culverin that is also very capable at taking down buildings and can help against armies. It should be noted, however, that Light Cannons do not shine against infantry nearly as much as Falconets do, with a combination of weaker damage, area of effect and multiplier making them incapable of taking on large groups of infantry like Falconets can. This is why they should be used to destroy buildings and enemy artillery first and foremost, while their decent firepower against regular units is more of a bonus than their specialty. Aennas and Forest Prowlers should be used as a backbone of the Haudenosaunee army when it comes to dealing with infantry, with Light Cannons providing additional support.

As Light Cannons are unique the Haudenosaunee, only technologies that they have access to are shown in the following table:

As Light Cannons are unique to the Haudenosaunee, only their cards and other civilizations' TEAM cards are shown in the following tables: 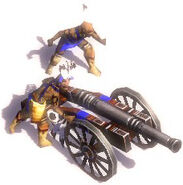 An in game Light Cannon.
Community content is available under CC-BY-SA unless otherwise noted.
Advertisement