Age of Empires Series Wiki
Register
Don't have an account?
Sign In
Advertisement
in: Age of Empires III, Artillery, Mercenaries,
and 3 more

The Li'l Bombard is a mercenary heavy artillery unit in Age of Empires III: The WarChiefs.

The Li'l Bombard has a decent number of hit points, unlike other artillery units. It is very slow but is very good at taking down ships and buildings. It can also attack other units, but it is very vulnerable to cavalry designed to counter artillery. It uses the same model that the Great Cannon and Redoubt Cannon originally use. The Li'l Bombard is a smaller version of the Great Bombard.

Although slow and extremely expensive, just three of these Bombards will destroy nearly all infantry that approaches them. They also surprisingly do well against cavalry because they have high base damage instead of having a large attack bonus against infantry, and do not have a negative multiplier against cavalry. They are actually capable of taking out entire armies of cavalry provided they are guarded well. However, since update 5208, they received a negative multiplier against cavalry and shock infantry, reducing the damage done by the Li'l Bombard to these units by half. Li'l Bombards should be used similarly to Heavy Cannons. Be sure to guard them with heavy infantry or light cavalry. With the hit point improvement upgrade and all cards (any European and Indian allies), the Chinese Li'l Bombard is the artillery with the highest hit points, 1,008.

The Great Cannon is a more powerful version of the Li'l Bombard. It cannot be obtained during normal gameplay, appearing only in the Bring Down the Mountain scenario of the Act II: Ice campaign. In this scenario, the player must close the three passages in order to prevent the Russian convoys with Great Cannons from crossing through them and escape. The Great Cannon is pulled by two cavalry (like the Great Bombard) and has the firing sound of a ship gun. It is very effective against infantry and can only be countered effectively by cavalry in hand-to-hand combat and anti-artillery artillery.

Li'l Bombard is the replacement for the Great Cannon in Age of Empires III: The WarChiefs.

The Redoubt Cannon is a campaign exclusive and more powerful version of the Li'l Bombard. The can only be found in the The Battle of Yorktown scenario of the Act I: Fire campaign. There, four enemy Redoubt Cannons will be split in half to guard two redoubts and must be taken down to complete the primary objective. The cannons will be guarded by Jaegers and will prove to be a lethal force against infantry. However, unlike Li'l Bombard, they cannot move, although they can switch between Limber and Bombard mode.

The Li'l Bombard (or their crew) speaks Italian, which is also shared with the Elmeti. 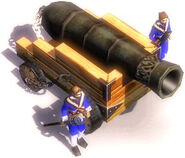 Two Li'l Bombards on the map 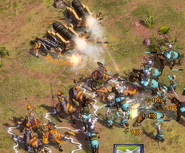 Li'l Bombards are capable of killing multiple units in one shot.

An enemy Redoubt Cannon firing in The Battle of Yorktown
Community content is available under CC-BY-SA unless otherwise noted.
Advertisement