Let’s Go is the fifteenth scenario of the Fall of the Trident campaign in Age of Mythology. The main objective is to recover the first Osiris Piece Box from Kemsyt's army.

Now that Amanra has broken Arkantos and the others out of prison, they flee to a nearby allied village to reorganize themselves. They must first destroy the Lighthouse of a nearby Black Sails Pirates's town to make the seas safer to sail into. Afterwards, they will need to recover the first Osiris Piece Box from Kemsyt’s Army. They have to hurry however, as Kemsyt plans to move the Piece deeper and deeper within his city, making the recovery more difficult.

The first task is to break the Avengers out of their cell and then break down southeast prison gate to reach the southern shore. Shortly after, Kemsyt’s Transport Ship will unload some Axemen guards to attack but the heroes can easily defeat them. When Setna’s transports arrive, players should ignore all other enemies and flee to the Abydos Resistance to the southwest. If some Axemen are left on the prison island, they will be trapped there and use up some of the enemy’s population cost.

Upon leaving the island, the War Turtle should be sent ahead to defeat a couple of Pirate Ships that will be awaiting in ambush. Once the coast is clear, the Transport can continue sailing ahead and unload their cargo at the Abydos Resistance. These will convert to the player’s side and grant them a Town Center, a Temple, a Pharaoh and some Laborers.

This goal is actually optional but makes the main objective of the scenario easier to accomplish.

The Abydos Resistance have little resources to offer but there are just enough starting resources and men to repel the first few attacks and advance to the Heroic Age. Players must produce Laborers to gather said resources and build a Dock in the small area in west corner of map. It will be safer to fish from there as the Dock previously granted will regularly be attacked by War Barges sent by Kemsyt. Due to the long range of these ships, it is best to avoid constructing other buildings especially houses near the water if possible.

The heroes, including the Pharaoh if necessary, should stand guard near the forests of palms that lead to the Pirates’ Citadel to fight off attacks made up of Spearmen and Petsuchos in order to protect the Laborers. Players have the option to wall off both the northwestern and northeastern area of their encampment near the jungle to funnel off all attacks towards the main road to the Pirates’ Citadel. This will also enable the player to respond to other enemies, made up of more Spearmen and a Scarab, that will disembark from the northernmost area on the map via Pirate Ships where the Pirates also occupy. If the player feels overwhelmed at any time, they can cast Plague of Serpents either on land or in the water.

The player should build an Armory and advance to Heroic Age as soon as possible in order to build a Market to prevent Gold starvation while casting the Prosperity god power. On Easy and Moderate levels, advancement is automatic, with Nephtyhs and Sekhmet respectively.

Otherwise, both minor goddesses are good options: Hathor provides the Petsuchos with formidable ranged attack, and the Sundried Mudbrick technology which reduces cost of buildings, thus saving gold. Note, however, that Rocs are unavailable in this scenario. Meanwhile, Nephthys grants the Leviathan which is a tough transport that can be used to counter most enemy ships and her technologies boost Priest and Pharaoh attack against Myth Units, which the Pirates and Kemsyt will train in high numbers. On advancing, the player can also start training Ramming Galleys to counter the War Barges.

To stop the Pirate Ship attacks, the player must destroy their Lighthouse. A Siege Works and Barracks must be built to train Siege Towers and Axemen respectively. When a decent sized army is assembled, players can attack the Pirates town. The Heroes can target the enemy Petsuchos and Pharaoh, the Axemen can handle the Crocodiles of Set and Spearmen while the Siege Towers demolish the Citadel and all other military buildings. Further north, there will be more enemy units, along with several Scorpion Men, guarding a Temple and the Lighthouse. Once all of these are eliminated, the Pirates will no longer be able to sail safely and all their ships will collide onto rocks. The player can now expand into the Pirates’ former town to claim the Settlement and the Gold Mines near the area. All available Relics can also be captured, especially those that make Siege Weapons and Myth Units cheaper. If the player is still short on food, there is an additional well protected fishing hole just west of the acquired settlement.

Players must resist looking at the Osiris Piece Box as otherwise it will trigger a 13-minute countdown until Kemsyt moves it deeper into the city and further away from the checkpoint near the southern gates of the city via Shifting Sands. The Box will be moved two times, and the deeper it goes, the harder it will be to retrieve it. Before sailing to the mainland, players should advance to the Mythic Age and invest into as many technologies as possible. Thoth is the preferred minor god as he provides more War Turtles to strengthen the navy, makes War Elephants stronger and boosts the economy. Once the player has trained enough Priests, War Elephants, Siege Weapons, Transports or Leviathans and a handful of War Barges, they must wait until Kemsyt sends one more wave of his own War Barges. This will provide them enough time to sail close to where the Osiris Piece Box is kept and destroy all Guard Towers along the coastline.

The army can now disembark to break down the walls holding the Osiris Piece Box and defeat all soldiers standing guard nearby. Meteor can be cast on the nearby enemy military buildings to stall the enemy’s unit production. Once enough obstacles have been cleared, players can begin moving the Osiris Piece Box towards the southern Wall with several units escorting it for protection. Kemsyt will spawn Anubites by the gate to try and recapture it but all available Heroes should be enough to incapacitate them. After destroying the Towers and the Gate, the Osiris Piece Box can move towards the flag and the player will be rewarded with victory.

The number of units granted around the prison is enough to take out all enemy units defending the Lighthouse even after taking out most of the prison guards. Players can use Kebenits to initiate the attack and kill as many soldiers that are standing guard. If a few unit move out of reach, the Heroes and Avengers can disembark to finish them off. It’s only a matter of slowly hacking at the Lighthouse until it collapses, preventing all future Pirate ships from attacking and sending their troops to the player's base. However, even with the Lighthouse destroyed, the player will still be attacked by Pirates if they venture too close to their northern island encampment. 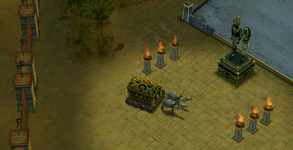 Once 26 minutes has elapsed, Kemsyt will simply move the Osiris Piece Cart to the third and final location without using any God powers.

After 13 minutes, Kemsyt will use the Shifting Sands God power to transfer the Osiris Piece Cart to the next location within a more fortified area.

Once the player gains sight of the Osiris Piece Cart, the 13 minute countdown will begin until Kemsyt moves it to the next location. 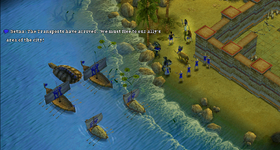 Players do not have to wait for the transports at the southeastern area of the island and may depart at any location around the island after breaking free from the prison cells. In this way, the player can avoid fighting the guards altogether. 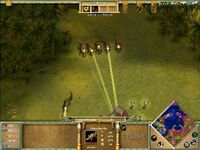 Kamos will actively harass the player early game with massed Petsuchos. The player in response should mass Priests and keep the Heroes nearby to repel these attacks. 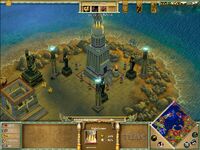 The Lighthouse that must be destroyed to make the campaign scenario easier.
Add a photo to this gallery
Retrieved from "https://ageofempires.fandom.com/wiki/Let%27s_Go?oldid=271002"
Community content is available under CC-BY-SA unless otherwise noted.