The Leitis (plural Leiciai) is the unique unit of the Lithuanians in Age of Empires II: Definitive Edition. It is a heavy cavalry unit whose attack is unaffected by armor, but only against units.

Leiciai can be upgraded to Elite Leiciai in the Imperial Age.

The Leitis is a variation on the Knight line, with more Line of Sight in the Castle Age, less hit points in Imperial Age, a cheaper gold cost but slightly more food cost, more speed, less armor, and higher attack and the ability to bypass enemy armor.

Aside from the extra 150 food at the beginning, Lithuanians have no real economy bonus that helps them in the Castle Age, and while an early rush into fast Castle is a viable strategy, in most cases the player would follow this up with Knights rather than Leiciai. Most of the time, the player is better off focusing on Knights until the late Castle Age.

If the player starts with a Castle (like in the Regicide game mode) or the game reaches such a point, Leiciai generally outperform Knights in a few ways: in the Castle Age, Leiciai beat generic Knights one-on-one and in the Imperial Age, they are cheaper and much quicker to upgrade.

However, if player's economy is thriving, and the player manages to create at least two Castles, they may prefer the Leitis over the Knight line, as their attack ignores armor, so they are able to easily defeat well-armored units like the Serjeant, the Teutonic Knight or the Boyar, leaving units like these basically "naked". The special attack of the Leitis also has the advantage that it negates every armor upgrade at the Blacksmith researched by its opponents, bonuses regarding melee armor, or unique technologies that improve melee armor, so if an opponent researches all of these upgrades, it will be a waste of resources that could be better spent on more units or attack upgrades, rather than increasing armor. For the Leitis itself, the increased attack upgrade from the Blacksmith will amplify their already powerful anti-armor attack.

A common dilemma for Lithuanian players in the late game is whether to use Paladins or Elite Leiciai, as both are affected by the Relic bonus. This depends on the situation and available resources. If it is a 1v1 match and there are not large amounts of archers, or if there are some specific match-ups (e.g. durable melee-armor units), the Leitis should be preferred, since their attack deals much higher damage and can decimate the enemy army much quicker. But in team games and particularly in a pocket position as well as against large groups of archers and to destroy enemy bases, the player should prefer Paladins instead, since their hit points and pierce armor are higher, and they can still also deal a fair amount of damage, which can be high as 20 with all four Relics collected.

As a cavalry unit itself, the Leitis can be cost-effectively countered by any of the common anti-cavalry counters, such as Halberdiers but with just two Relics, the Elite Leitis can kill Halberdiers in three hits, faster than most units in the game, like the Elite War Elephant. Camel Riders can also pose a threat to them, since they have high attack bonus against cavalry and are tankier than Halberdiers, although in some cases, Leiciai can actually survive a combat and trade cost-effectively against Camel Riders, due to the latter's slightly lower attack speed and higher gold cost than Leiciai. Leiciai still will not fare well against Battle Elephants and Imperial Camel Riders, so it is advisable to avoid these match-ups. Also, they can be defeated by other unique units such as the Samurai, Kamayuk, Genoese Crossbowman, Mameluke and War Elephant, though they will receive a lot of damage from Leiciai. Leiciai can also suffer against large groups of foot archers, Cavalry Archers and even Hand Cannoneers due of having less hit points and pierce armor than a Paladin, even when they are faster than them. For this reason, using Leiciai in conjunction with the fast and armored Lithuanian Skirmishers is neccesary when facing archer civilizations. Due to Leiciai's attacks ignoring any melee armor, their attacks are not amplified by the negative armor of rams, but that is not an issue because Leiciai have a better attack than the Knight line anyway.

Leiciai are more of a 1vs1 unit because of less varied enemy army (it will be either cavalry-focused or archer-focused) and less reliance on gold. They are less preferred in team games, due to gold being more easily available and the Paladin being more well rounded. Also, Relics are easier to get, since they are more in number (Elite Leiciai usually do not offer much improvement after two Relics except against buildings).

As Leiciai are unique to the Lithuanians, only technologies that are available to them are shown in the following table: 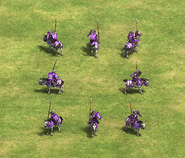 A group of Leiciai