5
The Legionary is an untrainable infantry unit featured in some campaign scenarios of Age of Empires II HD: The Forgotten. Statistics-wise, the Legionary is comparable to the Elite Jaguar Warrior, with major exceptions being the different pierce armor and speed.

Since Update 42848, Legionaries appear in the Battle Royale game mode, acting as Guardians of buildings. Higher numbers of Guardians appear near Castles.

It is also available in the Scenario Editor.

In the Alaric campaign, Legionaries appear throughout each scenario as enemy troops.

In the first scenario, All Roads Lead to a Besieged City, there are Legionaries serving the "Legions of Rome", most notably those marching in the forest in the east, and those guarding the civilian Docks in the west bank of the river.

In the second scenario, Legionaries on the Horizon!, there are Legionaries serving both the "Legionaries" and "General Mageius' Camp". In the beginning of the game, there are a few Legionaries defeating a group of much weaker Gothic troops. Later, there are other Legionaries among another group of enemy troops, crossing the bridge from the northwest.

In the fourth and final scenario, The Sack of Rome, there are Legionaries in both the "City Guard" (in Rome) and "Imperial Legion" (reinforcements outside Rome). There are several Legionaries coming in attempt to destroy the player's Battering Ram while the player is besieging Rome from the east. Later, among the small groups of reinforcements coming from the southwest heading towards the player's camp (inherited from Athaulf), there is one Legionary in each batch.

Legionaries feature in the second scenario, The Rebellion of Melus, as friendly units, renamed as "Tagmata", serving the Byzantine Empire. As Melus sends Michael Nautikos (the player) to meet the leader of Brindisi, he gives the player a group of Legionaries.

Legionaries appear in most scenarios of the revised Alaric campaign and some of the Attila the Hun campaign, always representing elite Roman troops. Notably, they replace the Western Roman Empire's Champions spawned after defeating Orleans in Attila's fourth scenario, A Barbarian Betrothal. 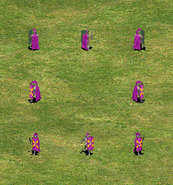 A group of Legionaries

A re-enactor resembling a Legionary from the fifth century AD 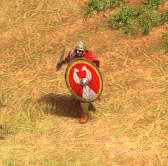 A Legionary in the Definitive Edition

Legionary Guardians in the Battle Royale game mode.
Add a photo to this gallery

Retrieved from "https://ageofempires.fandom.com/wiki/Legionary?oldid=296579"
Community content is available under CC-BY-SA unless otherwise noted.