Age of Empires Series Wiki
Register
Don't have an account?
Sign In
Advertisement
in: Age of Empires III, Commerce Age, Artillery,
and 2 more

The Leather Cannon is an artillery in Age of Empires III: Definitive Edition that is unique to the Swedes and can be trained at the Artillery Foundry and Fort. It is an artillery that fires faster but does less damage and has less range than other artillery units.

Leather Cannon has the title of being an artillery unit that is available from the Commerce Age, like the Chinese Flying Crow. It is more effective against infantry than buildings. In addition to its performance and also its early access, It is also the most expensive unit in the Commerce Age.

One of the most noticeable features of Leather Cannons is that they do not have a separate Limber Mode and Bombard Mode, unlike most artillery units. They can fire instantly and move quickly. This is a huge advantage to Leather Cannons and makes them easier to use in combat. Due to their Gunpowder unit tag, Arsenal upgrades such as Paper Cartridge and Flint Lock affect them, making them even stronger, along with the usual artillery upgrades such as Professional Gunners. These upgrades can be researched in the Commerce Age instead of Fortress Age because Advanced Arsenal is already available to the Swedes as a feature. They also have the quickest rate of fire for an artillery.

They are very fragile against any cavalry unit and due to their lesser range, they can lose to Heavy Infantry like Musketeers that charge closely and hence must be protected with other units all the time. They can be also countered by Abus Guns, Huaracas, and most Artillery units such as Falconets and Culverins.

As Leather Cannons are unique to the Swedes, only technologies that they have access to are shown in the following table:

As Leather Cannons are unique to the Swedes, only their cards and other civilizations' TEAM cards are shown in the following tables: 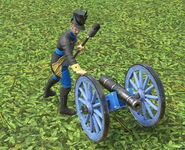