Age of Empires Series Wiki
Register
Don't have an account?
Sign In
Advertisement
in: Age of Empires II, Infantry heroes, Rise of the Rajas, Le Loi

Le Loi is a campaign in Age of Empires II HD: Rise of the Rajas. It focuses on the actions of Lê Lợi (1385 – 1433), the first emperor of Vietnam from the Later Lê dynasty, primarily on how he led the Vietnamese people on a revolt known as the Lam Sơn uprising to free themselves from the Chinese Ming dynasty occupation, which made him as one of the most famous figures and greatest heroes in the Vietnamese history.

6
Le Loi is an infantry hero. He used to have the appearance of a Champion. Since the Definitive Edition, he has a unique appearance. As a hero, he cannot be converted and can regenerate health. Like other infantry units, he is affected by all upgrades that affect infantry as well as any other bonuses that affect them. He is also available in the Scenario Editor.

The Le Loi campaign consists of 6 scenarios. The player plays as the Vietnamese, and the player color is yellow.

The campaign is narrated by an old man who, at the outro of the last scenario, reveals himself to be Wang Tong (Vietnamese: Vương Thông), a Ming Chinese general who fought against Lê Lợi during the Lam Sơn uprising. In the Definitive Edition, it was narrated by an unnamed historian in the modern days.

Some of the scenarios in the Definitive Edition have been slightly reworked, but the general map and objectives remain the same. More noticeably, the scenarios are significantly harder in the Definitive Edition because the AI is now programmed to be more aggressive, with some scenario layouts having drastically changed. For example, the second half of the Battle of Hanoi scenario is now more of a traditional build and destroy scenario where the Ming AI prioritizes attacking the Monastery. 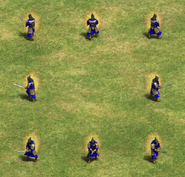 Le Loi in the Definitive Edition

A statue of Lê Lợi in front of the Municipal Hall of Thanh Hóa Province
Community content is available under CC-BY-SA unless otherwise noted.
Advertisement