Age of Empires Series Wiki
Register
Don't have an account?
Sign In
Advertisement
in: Age of Empires II, Infantry heroes, Rise of the Rajas,
and 3 more

Le Lai (Vietnamese: Lê Lai) is an infantry hero in Age of Empires II HD: Rise of the Rajas. He appears in the second scenario of Le Loi campaign, The Mountain Siege, and is available in the Scenario Editor. He is based on a Vietnamese hero with the same name who was a subordinate commander of Le Loi's army during the Lam Son uprising against the Ming rule in Vietnam from 1418-1427.

In the game, Le Lai is represented by two different heroes both appearing under the same name. As heroes, neither can be converted and both can regenerate health. Both versions appear in The Mountain Siege.

6
Le Lai also appears as a Champion. While holding a stronger attack than the Two-Handed Swordsman version of his, the hit points are fewer, the melee armor lower, and the attack bonuses are removed. On the plus side, his Line of Sight is a little longer, and he takes no bonus damage from anti-infantry attacks. Overall, Champion version is probably a little weaker.

5
In Age of Empires II: Definitive Edition, Le Lai appears as a Cavalry Hero. His stats are similar to the Two-Handed Swordsman version. His model is shared with Dinh Le and Wang Tong. 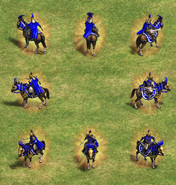 Many views of Le Lai on horseback in the Definitive Edition

When Le Loi started to assemble his army in 1416, Le Lai was one of the first men to join. Le Lai soon became one of Le Loi's most trusted men, and during a meeting at Lung Nhai, Le Loi and 18 other men, including Le Lai, made an oath to protect Vietnam at all cost, no matter what the consequences may be. In February 1418, the rebellion became active after Le Loi proclaimed himself the king of the Binh Dinh Province. During this time, Le Lai was appointed as one of Le Loi's subordinate commanders, a position he would keep until his last stand at Chi Linh.

In April 1418, two months after Le Loi had proclaimed himself king of the Binh Dinh Province, the Ming army surrounded a troop of Vietnamese rebels that included Le Lai and Le Loi at the Chi Linh mountaintop for ten days. During those ten days, the Vietnamese troops had a shortage of food and water, and were falling ill due to the cold weather. Fearing they would soon be crushed by the Ming army, and knowing that the capture of Le Loi would lead to the end of the Vietnamese rebellion, Le Lai volunteered to pose himself as Le Loi by wearing Le Loi's armor and leading an assault with 500 men in total the remaining Vietnamese troops along with two elephants against the Ming army, giving Le Loi and his army time to escape. While his diversion worked, Le Lai was captured and executed by the Ming with the troops that were crushed in the assault. The siege and Le Lai's sacrifice is depicted in The Mountain Siege.

Due to Le Lai's sacrifice, Le Loi would live to fight the Ming army for nine more years until finally achieving victory and independence for Vietnam in 1427. After defeating the Ming army and becoming emperor of Vietnam, Le Loi declared that if a memorial was ever to be held for him after his death, a memorial for Le Lai must be held one day before his own as a means of honoring Lai's heroism and sacrifice during the uprising.