Alive (as of No Empire Lasts Forever)

To Finish a Fleet

David Sobolov
Lao Chen is the deuteragonist of the Act II: China campaign in Age of Empires III: The Asian Dynasties, and an ally of Captain Jian Huang.

Lao Chen is a burly sailor under Captain Huang's command. He is suspicious of Admiral Jinhai. After landing in the "New World", Chen wishes to leave the "rock" and return home. He is often foul mouthed in the campaign and frequently derides Jinhai's mercenaries.

Chen fights with his fists in melee combat and can use Anchor Fist, a powerful AOE melee attack. He also have a whopping 80% melee resistance and, unusually for a hero, can gather resources from crates.

Like other heroes, Chen has many hit points, but if he falls, he will collapse instead of dying and need to regenerate enough hit points to be rescued by allies. He can collect treasures, but unlike the Shaolin Master, cannot build Trading Posts and Town Centers. 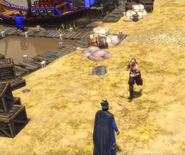 Chen and Huang awaiting their fleet's arrival to the New World
Community content is available under CC-BY-SA unless otherwise noted.
Advertisement