Age of Empires Series Wiki
Register
Don't have an account?
Sign In
Advertisement
in: Unique units, Age of Empires III, Cavalry,
and 3 more

The Lancer is a melee heavy cavalry in Age of Empires III that is unique to the Spanish and can be trained at Stable, Fort, and Galleon once the Fortress Age is reached.

Lancers are also available to Knights of St. John in the Act I: Blood campaign.

Unlike most cavalry which are weak against melee infantry units, the Lancer has a large bonus against infantry (double the damage of a Hussar). It is somewhat at a disadvantage when fighting other cavalry or enemy Settlers/Villagers due to its reduced base attack and speed. In rare cases, it can pick off Settlers who stray too far off from the Town Center, as well as quickly kill most explorers due to their classification as infantry. The main advantage of the Lancer appears to be its higher durability and the possibility of getting a Royal Guard upgrade in the late game, unlike the Spanish Hussar.

The "Unction" card, ten Missionaries, the "Caballeros" Home City Card, Stable upgrades and all Spanish cavalry cards (+30% attack and hit points) stack to allow the Lancer to quickly kill infantry units. The numbers do not take into account minor civilization bonuses. Lancers are capable of using trample mode when all upgrades and shipments have been sent and when backed by Missionaries using Unction. It's better to only activate the mode on a handful of units rather than en masse. The Unction Lancer, however, can be beaten by ranged cavalry such as the Keshik or Dragoon. Though Lancers beat the Ashigaru Musketeer in combat, it is not cost effective to get into an extended confrontation with them due to the inability of the unit to ultimately come out ahead (due to cost and population effectiveness). Hit and run raids on masses of Ashigaru or other anti-cavalry infantry are best.

The Lancer starts at the Veteran level, but without the increased hit points and attack.

As Lancers are unique to Spanish and Knights of St. John, only technologies that they have access to are shown in the following table:

As Lancers are unique to Spanish and Knights of St. John, only their cards and other civilizations' TEAM cards are shown on the following tables: 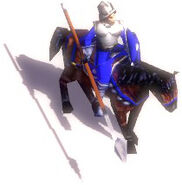 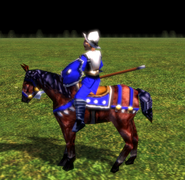 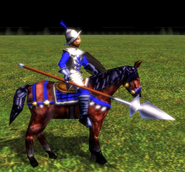 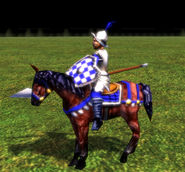 Other side of the Lancer Garrochista model
Community content is available under CC-BY-SA unless otherwise noted.
Advertisement